You may have thought Pokémon Go was a fleeting gaming phenomenon. But Pikachu, it turns out, is made to last. At least, one anonymous sculptor believes so.

On Sunday, New Orleans residents in the Lower Garden District woke up to a surprise addition to a local square: a larger-than-augmented-reality Pikachu statue. The fiberglass version of the popular Pokémon creature popped up on top of an unused fountain, reports artnet News, and is creating “quite a sensation,” according to the neighborhood association’s vice president Karon Reese.

People have quickly taken to Instagram to share their selfies with the statue — or “Pokemonument,” as it has been dubbed, and an initial Reddit post on the statue has garnered more than 2 million views, drawing visitors to the square.

Made to look like aged bronze, the Pikachu statue is a fierce version of the rosy-cheeked yellow character it represents. No creator has yet come forward to claim it as his or her work, and it remains unclear what will be done with it: while technically the guerilla art piece could be considered vandalism, none of the neighborhood association representatives seem to be bothered. (In fact, they’re enjoying the crowds it’s bringing.) Ultimately, however, its fate resides with city officials.

In the meantime, New Orleans residents are flocking to the square to see what happens when virtual reality becomes, well, actual reality. 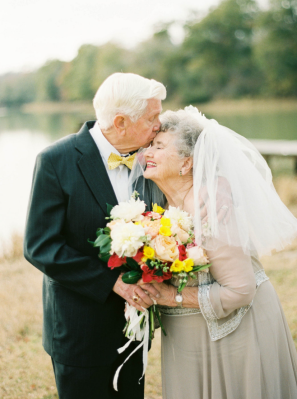 Grandparents Celebrate 63-Year Marriage With Sweetest Photoshoot Ever
Next Up: Editor's Pick