How Donald Trump's Divisive Campaign Is Hurting His Hotel Business

Are Donald Trump’s hotels an early casualty of one of the most divisive presidential campaigns in generations? If new numbers released by an online booking site are any indication, the answer may be “yes.”

Trump hotel bookings have plummeted nearly 60% for the first half of 2016, according to new data released today by the online travel site Hipmunk. The site measured the percentage of Trump bookings within its markets. For the first quarter, it found reservations tumbled 59.36% compared with the previous quarter, and for the second quarter, the group suffered a 57.46% decline, according to Hipmunk.

“The share of Trump bookings is smaller than the same time frame of 2015,” says Adam Goldstein, Hipmunk’s CEO.

Trump Hotels, the hotel management company that bears the presidential candidate’s name, doesn’t publicly release any occupancy data or earnings by property. But Eric Danziger, CEO of Trump Hotels, said Hipmunk’s use of percentages come from “minute numbers” that are are inconsequential and don’t offer a complete or accurate representation of its booking. Danziger added, “We are very pleased with the performance of our business.”

It isn’t clear what, exactly, Hipmunk’s numbers represent in terms of actual bookings. The site would not reveal the total number of reservations that the percentages represented. Hotels typically do not report their results as a percentage of citywide bookings. And Goldstein himself cautioned about inferring too much from Hipmunk data, noting that Hipmunk users skew “urban, millennial and professional.”

“The decrease in the share of hotel bookings going to a Trump property indicates that this particular audience chose other accommodation options over the Trump brand at a higher rate than they did the year prior,” said Goldstein.

With Donald Trump scoring high disapproval ratings, is his business brand losing some of its luster? A recent study by Redfin, the real estate brokerage firm, found that condominiums bearing the Trump name no longer get a market boost, reports Luxury Daily. “Our study carefully controlled for many factors in order to compare Trump-branded condos to other luxurious homes to ensure we were not comparing apples to oranges,” Nela Richardson, chief economist at Redfin, told Luxury Daily. “We did, in fact, find that there was a Trump premium prior to his campaign and that it vanished in the first five months of 2016.”

Still, Redfin cautioned against drawing the conclusion that Trump’s presidential campaign is hurting his business, noting that the overall market for high-end condos has softened. “Trump condos have lost the price advantage they enjoyed before the campaign and are starting to sell similarly to comparable condos,” Ms. Richardson told Luxury Daily.

What travel agents and meeting planners are seeing

Meaning that, for now, the only way to answer the question “How’s business?” is anecdotally. And the anecdotes offer a decidedly mixed view.

Annie Davis, founder of Palm Beach Travel, an American Express-affiliated travel agency in South Florida, says bookings of Trump hotels haven’t changed since the presidential run. “If bookings were down 60%, [Trump hotels] would be sending out promotions and agent incentives,” she says. “We see that right now for France, but not for the Trump hotels.”

Quite the opposite, actually. The Trump-owned Mar-a-Lago, a private club in Palm Beach and a popular meeting venue, is “booked solid” she says. “They are turning people away,” adds Davis.

Other agents, such as Robin Neil, a travel agent from Seattle, say several clients have told her flat-out “anything but a Trump hotel.” “I don’t question it,” she says, adding, “I am not going out of my way to support or sell his properties.”

Timothy Arnold, a meeting planner from Dallas, says his experience also reflects the Hipmunk numbers. “I have sourced Trump hotels for many meetings, but have not booked one since Donald Trump threw his hat in the ring for president,” he says.

There’s a pragmatic reason for steering clear of a Trump hotel, he adds. “The majority of my clients feel that booking one of his hotels would be too polarizing right now, potentially driving away a good portion of their members,” he says. “There is clear concern about driving away attendees who are or might be against his bigotry, racism, xenophobia, and intolerance.” 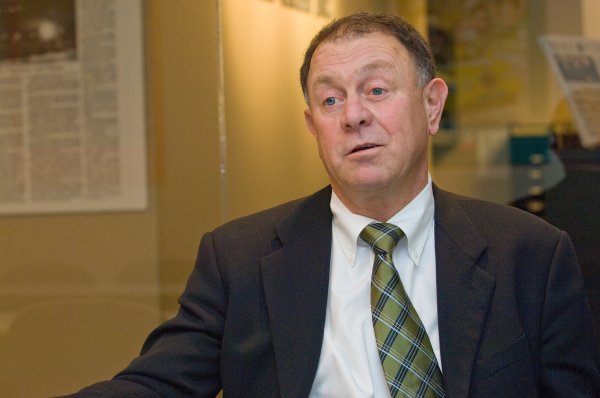 Republican Rep. Richard Hanna Announces He Will Vote For Hillary Clinton
Next Up: Editor's Pick