Billionaire investor and philanthropist Warren Buffett on Monday challenged Donald Trump to release his tax returns, accusing him of hiding something from the public.

“I’ll bring my tax return. He can bring his tax return—nobody’s going to arrest us, there are no rules against showing your tax returns—and just let people ask us questions about the items that are on there,” Buffett said on stage with Hillary Clinton at a rally in Omaha.

Trump has repeatedly said he will not release his tax returns due to an ongoing audit, drawing criticism from former Republican nominee Mitt Romney and Supreme Court Justice Ruth Bader Ginsburg, among others.

“You’re only afraid if you’ve got something to be afraid about,” Buffett said, noting that his own tax returns are currently being audited as well. “He’s not afraid because of the IRS. He’s afraid because of you.”

Buffett—who has supported Clinton throughout the presidential race and has poked fun at Trump previously—joins other billionaires and business leaders who have now called Trump’s business background into question. Former New York City Mayor Michael Bloomberg argued in a speech at the Democratic National Convention last week that Trump’s business experience was no asset.

“Donald Trump says he wants to run the country like he runs his business,” Bloomberg said. “God help us. I’m a New Yorker, and I know a con when I see one.”

At the Omaha rally, Buffett said a monkey could have made more money than Trump’s hotels and casinos in 1995, saying “if a monkey had thrown a dart at the stock page, the monkey on average would have made 150 percent,” according to Reuters. 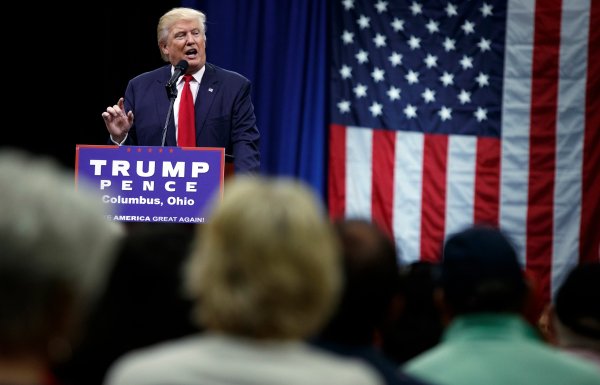 Donald Trump: 'The Election's Going to Be Rigged'
Next Up: Editor's Pick