Here's What You Need to Know About Afghanistan's Security Challenge

Afghan security guard looks on while standing near the damaged wall of compound at the scene of a powerful truck-bomb blast that targeted a hotel used by foreign contractors on the outskirts of Kabul on Aug. 1, 2016
Wakil Kohsar—AFP/Getty Images
By Nikhil Kumar

The giant truck bomb and gunfight that shook a Kabul compound used by foreign contractors on Aug. 1 was only the latest reminder of the security challenge facing conflict-ridden Afghanistan. One police officer was killed, along with three Taliban attackers who targeted the Northgate Hotel. It could have been much worse: such was the strength of the blast that it tore open a deep crater outside the compound and briefly disrupted power lines across the Afghan capital. The attack came days after suicide bombers targeted a Kabul demonstration by thousands of Hazaras, an Afghan minority group. At least 80 people were killed in the devastating assault claimed by the Islamic State (ISIS). Amid growing concern about the situation in the country, here’s what you need to know about the still fragile state of security in Afghanistan.

Civilian casualties have been rising as the Taliban regains territory
The end of NATO’s combat mission in Afghanistan and the departure of most foreign troops at the end of 2014 saw the passing of most security responsibilities to local forces. But they have struggled to contain a resurgent Taliban, which has continued to regain Afghan territory even as it has faced internal upheavals. As a U.S. report in late July said, “high attrition rates, including high casualty rates, continue to make the sustainability of the [Afghan National Defense and Security Forces] a major concern.” The upshot is fertile ground for the Taliban to expand its influence. At the end of January, for example, just over 70% of Afghan districts were under government control or influence, according to the same report. By the end of May, that figure had declined to 65.6%, with nearly 9% of districts under insurgent control or influence. In a worrying sign, a quarter were classified as “at risk.”

The territorial expansion has been accompanied by a deteriorating security situation, with U.N. figures showing that more than 5,100 civilians had been either killed or maimed in the first six months of this year, a half-year record since the international body began keeping such records in 2009. More than 1,500 children were among the dead.

With security showing signs of worsening, the U.S. has been forced to rethink its withdrawal plans
Rising casualties and the Taliban’s territorial gains have led to a revision of America’s plans to exit Afghanistan. Earlier in July, President Obama acknowledged the worsening situation when he said he would leave 8,400 U.S. troops on the ground as he leaves office next year, instead of reducing the size of the American force to 5,500 by the end of 2016. Currently, there are around 9,800 U.S. troops in the country. “The Taliban remains a threat,” Obama said, as he announced the change in strategy.

Big questions, however, remain over the future of Afghan security. The troops that will still be on the ground when Obama steps down will not take on combat roles. Instead, they will continue to have a narrow mission: supporting counterterrorism operations and training local forces. Meanwhile, the Taliban, which named a new leader earlier this year after the death of former chief Mullah Mansour in May, continues to spread unrest, taking an important southern district in late July after heavy fighting that left around 17 policemen dead.

Read More: Here’s What We Know About The New Taliban Leader

Alongside the Taliban, the Hazara attack has raised fresh questions about ISIS activities inside Afghanistan
The attack on the Hazara protest on July 23 was the first inside Kabul claimed by ISIS. It was also its largest ever in the country. But officials remain skeptical about the group’s strength in Afghanistan, where its ranks are largely thought to consist of fighters who have broken away from the Taliban. “They are committing the same kinds of atrocities here in Afghanistan that they are noted for elsewhere, killing innocent men, women, children and — and [the attack in Kabul] is another indication of their brutality,” the U.S. commander in Afghanistan, General John Nicholson, said on July 28. But he added that the attack “should not be perceived as a sign of their growing strength.”

“Sadly, we have seen high profile attacks conducted in Belgium, France, Germany, even the United States,” he said. “And this is not necessarily a sign of growing strength in Afghanistan; indeed, their area is shrinking.” The focus, instead, remains on the Taliban, which is now led by a formerly little known cleric called Haibatullah Akhundzada. 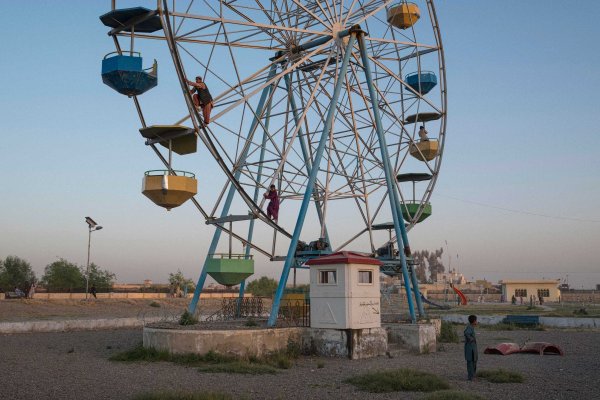 When War Is Just Another Day in Afghanistan
Next Up: Editor's Pick