The Bachelorette Watch: And The Winner Is...

It’s finally the finale of The Bachelorette and either Robby, the swimmer with the chlorine damaged hair and million-dollar veneers, or Jordan “Not Aaron” Rodgers will get down on one knee and proffer their heart and a Neil Lane diamond ring to JoJo. The only problem is that JoJo loves both men and she can’t choose between them. It’s like if Sophie’s Choice was a reality television show with fewer Nazis and more waterproof mascara. The only way this will be resolved is by staring off into the middle distance in a tropical setting.

Jordan Meets the Parents: JoJo is very excited to introduce Jordan to her family and immediately points out to them that he’s exactly the type of guy she always dates. Jordan proves her wrong by bringing hats for everyone in the family (oddly, they are not Green Bay Packers hats). Then Jordan reassuringly promises not to break JoJo’s heart and everyone sort of side eyes him. Later JoJo’s mom says JoJo and Jordan are too much alike and that she loves Jordan, because everyone loves Jordan — and that’s a problem. JoJo nods like she has some clue what her mom is talking about. Then Jordan miffs it by not asking her mother, father, or her brothers for their blessing to propose to JoJo.

Robby Meets the Parents: When it’s Robby’s turn to meet the parents, he immediately gets blessings from JoJo’s mom and dad. While JoJo’s mom and brothers grill him about his intentions towards JoJo, her father thinks that Robby is an “outstanding gentleman” (the whole “with outstanding hair” thing was implied in his statement.) Her dad gets strangely emotional about Robby, which makes JoJo emotional and it’s all adorable, but Robby didn’t bring anyone hats, so he is still the underdog.

Robby’s Final Date: JoJo and Robby visit the beach with their date soundtracked by their disembodied voices. Robby just wants JoJo to be the happiest person in the world. Is that too much to ask? Nah. Especially because his vision of pure happiness is a comfortable couch, a meatloaf dinner in the oven, a dog on the couch and the voices of children flitting through the air. JoJo notes that he is ready for a family and Robby says, “Oh was that obvious? I tried to make it obvious.” Then they make out. Later, “Jo” as Robby now calls her, comes to visit him in his hotel suite where he does his best to seal the deal. He loves her, he wants this to be forever and, according to the closed captioning, he’s a “heart virgin.” Is that a thing on teen Tumblr or something? They make out some more while looking at some photos from their three-week old past. She leaves him in his hotel room coming up with names for their dog (guessing!)

Jordan’s Final Date: JoJo is a little anxious because she isn’t sure that Jordan is that into her because he didn’t ask anyone in her family for their blessing on their union. She doesn’t understand that he has Neil Lane’s approval and that’s all that matters (or, you know, that women aren’t chattel and don’t need anyone’s approval to make their own life decisions). Then JoJo calls him out and says she was disappointed that he didn’t seek her father’s blessing. He explains that he didn’t want to ask her dad, because he didn’t know if she liked him that much. Ugh, JoJo’s mom was right, these two are way too similar. Later, JoJo goes to Jordan’s hotel room to continue expressing her disappointment over the fact that he didn’t ask for her hand in marriage. She thinks he is self-sabotaging because he is having doubts about their relationship. He flips his hair back and forth and pinky swears that he loves her. She walks into the hallway, leaving him to think about what he’s done, flipping his hair back and forth in regret.

JoJo’s Big Decision: If there is one thing that we have learned from the last 722 seasons* (*emotional estimate) of The Bachelor its that the toughest decisions are made while wearing a jewel-colored bathrobe and staring off a balcony in an exotic locale.

Last Ditch Efforts: Robby writes JoJo a heartfelt note. Jordan finally calls JoJo’s parents and asks for permission to marry their daughter. They willingly give it. Then Jordan writes JoJo a note and it’s so beautiful that JoJo starts to cry. She can’t choose between these two letter writing, perfectly coiffed men.

JoJo’s Decision: It’s the moment we’ve all been waiting for — whoever steps out of the limo first is going home to eat Ben & Jerry’s on the couch in his sweats while fielding calls from producers of The Bachelor. This year that role goes to … Robby. Robby walks to JoJo and offers his undying love and affection and a forever after fairytale. JoJo stops him. She’s just not that into him. She tries to cushion it by explaining that she really wanted it to be him, that she loves him, and hopes that he finds love someday, but strangely that doesn’t seem to make him feel better. He manages to squeak out that he just wants her to be happy and then bawls in the back of the limo as he disappears into the sunset.

The Final Rose: Jordan steps up to the plate and tells JoJo that he is in love with her, she’s his soul mate, and he choo-choo-chooses her. JoJo finally gets to tell him that she loves him too. He looks genuinely happy and then drops to one knee and asks her to marry him. She says yes and after Neil Lane’s trademark gets its contractually obligated airtime, Jordan slips the ring on her finger. JoJo gives Jordan the final rose of the season and he accepts it.

After The Final Rose: Later, Robby sits down with Chris Harrison to admit that he was confident going into his proposal, so when JoJo dumped him, it was both hurtful and confusing. Oh wow, getting dumped on national television is hurtful and confusing? Who knew! JoJo joins him on the couch and he says it’s okay that she said she loved him. She shuts him down by pointing out that it wasn’t that type of love, but she hopes he finds it someday. He then asks if she still thinks about a future with him, and she hems and haws and settles on, “I’m happy?” After that emotional trauma, Jordan and JoJo are reunited with their Neil Lane diamond ring. They address media coverage of their relationship and, of course, Aaron Rodgers (did you know that he’s Jordan’s brother? Have they mentioned that before?). Jordan diplomatically says that he and JoJo are dealing with it as a family now.

Bachelor in Paradise: The new season starts tomorrow and if that’s not frightening enough, Chad wants to be America’s next Bachelor. 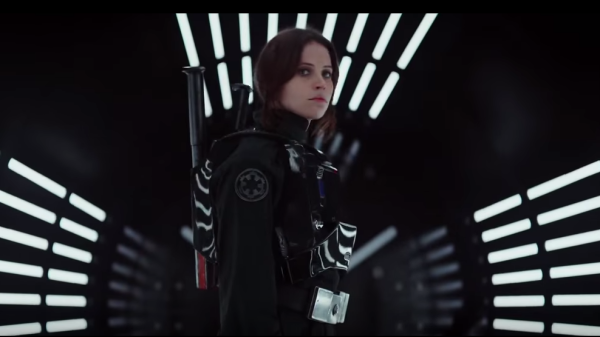 TV Spot Drops For 'Star Wars' Spinoff 'Rogue One'
Next Up: Editor's Pick