Danny McBride on Vice Principals: 'I Don’t See This As a Story About Race'

HBO’s Vice Principals has aired just three episodes of its debut season and has already generated controversy with its story of two high-school administrators, Neal Gamby and Lee Russell (Danny McBride and Walton Goggins), who set out to discredit Dr. Belinda Brown (Kimberly Hébert Gregory), the woman who got the job they both coveted: principal of North Jackson High. Denied the power they crave, they burn Brown’s house to the ground in the second episode, a stakes-heightening incident with racial overtones. While the war these vice principals are waging is overtly about who deserves to be principal, it’s tinged by the fact that they’re white men trying to demean and destroy a black woman.

Reactions to the show have been mixed. Although I think the show knows exactly what it’s doing in depicting white men’s feelings of disempowerment, other critics have questioned why the story is worth giving any oxygen at all. At the Television Critics Association conference in Beverly Hills, Danny McBride, the show’s co-creator and star, spoke to TIME about the thinking behind the show, his belief that some of the show’s critics are lazy and why his character is so resentful.

At your TCA panel, you and Walton Goggins predicted that viewers’ opinions of the show will change as they see more episodes. But given how abrasive Gamby and Russell have been right off the bat, is that expecting too much patience?

We’re making something that is divisive. I don’t think we have any illusions that we’re making something everybody has to like. The only thing I do take offense to is people who think we’re doing this in some bull-headed fashion, that we’re trying to make some broad comedy and exploiting or endorsing, somehow, ridiculous behavior. It is a story that unfolds over 18 episodes and some of the critiques for where we go in the beginning I can understand. They don’t know us, they don’t know what the story is. [TV critics] have been given six episodes of an 18-episode [series], so I can see how not having the whole vision can make you think one thing or another. But in a world where everything is fighting for attention—so many stories, so many movies—that’s exactly why we wanted to make this a TV show. From week to week, what the audience thinks is going to change and from week to week, what the audience wants to happen is going to change.

What about this story, with its disturbing white men-vs.-black woman plot, made it seem worth telling in the first place?

Ultimately, I don’t see this as a story about race. I don’t even see it as a story about sexism. It’s a story about power and about how people think power can fix things that are dysfunctional in their own lives. That’s what these guys are dealing with. Both of these guys have lives that, in their own regards, are failed. They’re not happy—they’ve put value into a position at a school that they think will somehow miraculously fix things. And when they’re denied that, they feel like it’s the person who [got the job] who kept them from being happy. A lot of times when you’re frustrated with where life ends up, you don’t have to go too far to find the cause of that. Sometimes it’s our own ambition. Sometimes our own misguided thoughts lead us to disappointment.

How Hamilton Became a Movie

Kimberly Hébert Gregory, who plays Dr. Brown, described the race of her character as incidental. Yet the show seems aware that two white men trying to destroy the life of a black woman looks a lot like racism, even if it’s not a story about racism.

We wrote this in 2014 and—not that America hasn’t always been very sensitive when it comes to race issues—but it wasn’t in the news as much as it is now. And it really wasn’t something that we thought about as being a hitch. If anything, we were thinking, Who’s going to be able to hold their own against these two assh—s.

When the idea came to me, Dr. Brown was always an African-American woman. These guys’ hate for her has nothing to do with her skin. Maybe it’s a weird clairvoyance. Maybe I knew Kimberly was the one we were going to be working with and I was writing for her. It didn’t have anything to do with trying to set a fire. When you get into a position where you say someone can’t be in a role because of what happens to [their character] because of their race, that’s an even more dangerous proposition. Assuming that someone like Kimberly wouldn’t be strong enough to stand on her own two legs because something bad happens to her in a story is ridiculous.

Not that this has anything to do with race, but if you did want to bring it down to that: The two biggest assh—s in this thing are white guys.

Have negative reactions to the show—people who don’t just dislike it but take umbrage—bothered you?

We would see people mischaracterizing the work, and you don’t take it personally. It’s lazy. You see reviews like, you have a job where you’re reviewing material and you’re only looking at it through a political perspective. It’s pretty clear in that second episode that what pisses [Gamby and Russell] off is the lives they lead. [Neal Gamby] is suffering through a divorce and he’s worried the wife’s new husband is going to replace him. Lee Russell has this whole weird power struggle going on in his. It’s pretty clear that that is what bothers these guys. And Dr. Brown happens to be the person that they shift blame to. It’d be one thing if we were just trying to make a broad comedy: Looking at these issues, not taking them seriously and just lampooning them. But it’s part of the DNA of the story. It’s Faust. These guys made a deal with the devil and they’re going to pay because of it.

Is the show’s marketing, framing it as a goofy comedy, mishandled?

I’m involved with that. I approve every single thing that comes out with the marketing of the show, and that’s what we wanted. I get bored watching a lot of comedies at movie theaters. I show up because I like the comedian, but I get a story I can see coming a mile away. For us to buck that story and do something that’s not anticipated is the DNA of the show. It evolves. It’s not even something you can grasp until the whole thing is complete. It’d be like reviewing a book when you’re only reading a chapter or two at a time.

I’m waiting to see where you go with Lee Russell’s effeminacy and the depictions of his Korean-American wife and mother-in-law, which have already raised some hackles. Are you trying to be provocative?

I don’t think we’re trying to be. I think people just don’t have a firm grasp of what the world is around them. When they see different cultures and different races together, they have an idea of what it’s supposed to be like. Russell’s storyline in his home life? That is strictly ripped from a friend’s life. His relationship with his mother-in-law is exactly what you’re seeing unfold. Just because you portray things not in a positive light doesn’t mean you’re trying to be provocative. I think for some people, that is reality. I have a buddy who has that reality.

When this show completes its run, do you want it to be remembered for its laughs, its vision of America or something else?

For me, it’s the ability to be able to tell a story and do something different. How people perceive it, you have zero control over that. If there is any theme to the show, it’s that things aren’t always what they appear. An enemy can end up becoming a friend. A friend can be an enemy. It extends to how we view each other. There should be a little more understanding in this world and [we shouldn’t be] so quick to jump to highlighting our differences. That’s what the show’s about. The fact that these characters throw around casual racism doesn’t mean that they’re the antichrist. It just means that they don’t have a point of view that necessarily aligns with everyone’s point of view. That’s not a reason to suddenly completely turn off to anything that’s important to them. Everybody’s got things that don’t cut the mustard if you really look at it.

This country used to be a country filled with lots of different views. That was what was cool about this country. It’s dangerously getting to a place where if your views don’t push a kind of agenda, then you’re an outsider or you’re somehow subversive and trying to be hurtful. I don’t think that’s the truth. I think people are always going to be different. We’re so used to seeing movies where you meet a character and there’s a checklist of all the likable things about them and why their quest is important, and we’re choosing to tell stories about people who don’t fit that mold and maybe their story isn’t worth following and their redemption isn’t worth seeing, but it’s interesting to us. But if you’re going to do that, you can’t be a baby and get upset if people don’t want to take that ride.

How does your own high-school experience color the show?

[In high school] I ran track and I also acted in plays. [For college] I went to an art school [at the University of North Carolina in Winston-Salem]. I didn’t have a sheltered existence. I saw lots of different people. Even going to an art school in the South is a rarity. It gives you perspective. But I was around enough people that didn’t have wide perspectives to understand sometimes that has less to do with actual hate and more to do with a lack of understanding or a lack of exposure to things. 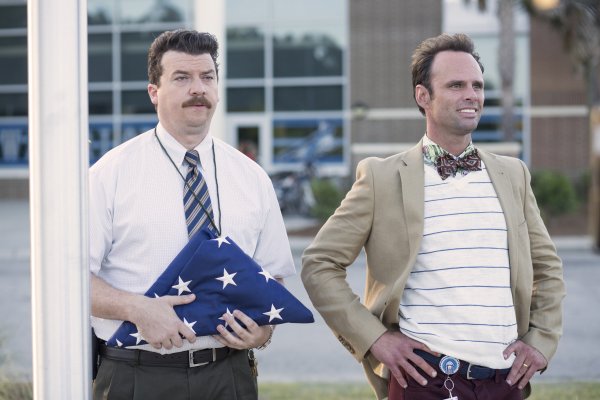