I know everyone gets after Donald Trump for saying outlandish things, but make no mistake about it: Donald Trump is not a fool. He’s been a friend of mine for 25 years. I call him a friend. I don’t agree with him on many of his issues. We’re 180 degrees apart on just about everything—which is why I could never endorse him—but Donald Trump is not a dumb man. You don’t acquire the wealth and power in the private sector as Donald Trump has by being stupid.

You see, he saw what happened to the Reform Party, the third party I ran in when I became the Governor of Minnesota. Back in the 1990s, Donald was interested in running for office as an Independent, and he was there when Pat Buchanan came in with these legions of people (who were backed by the Republican Party) and took over the Reform party, got the nomination and then didn’t even run. Buchanan took the money we raised (at that point, we had quite a large national base thanks to Ross Perot and myself) and he used that money to retire his previous campaign debts. He had no intention of using our campaign money to run for president and that’s what destroyed the Reform party. This was all done by design so that the Reform party would no longer be a threat to the Republicans. Well, Trump was there then. He saw it. And I believe he’s doing the same thing to the Republicans that they did to us. I mean, come on, his own wife pretty much recited Michelle Obama’s entire speech at the GOP convention and his daughter went on and on about the need for paid childcare, equal pay laws, and a bunch of liberal principles that we’ve never heard a Republican add to a presidential platform. And then Trump gets up and reiterates all the reasons why we need to build a wall. How is that not destroying the Republican Party? I have to say, as an Independent, I’m glad to see it.

Back in the ’80s the icon of the modern day Republican Party was President Ronald Reagan—and many Republicans today still consider him the greatest president of all time. It seems to me that one of Ronald Reagan’s most famous quotes was, “Mr. Gorbachev, tear down this wall.” I think Ronald Reagan today is turning over in his grave because the Republicans want to build a wall between Mexico and the United States. To me, the whole wall is ridiculous. Do we want to live in East Berlin? No. And Ronald Reagan would not support this; he probably wouldn’t even be considered for president in today’s Republican Party.

Which brings me to my next point: why is the media constantly comparing me to Trump? Before I ran for Governor of Minnesota, I was the mayor of Brooklyn Park, which is the fourth largest city in Minnesota. So yes I had experience in an executive role of government. Yes, I was also an actor, a retired pro-wrestler, and considered a celebrity, but I was also a mayor. I still find it interesting that the media never mentions this fact. They think that one day I simply woke up, decided to run for governor of Minnesota, and people voted for me on a whim just to see what would happen. Well, there are vast differences between Trump and me that no one seems to want to bring up. Trump is running as a Republican. I ran as a third party candidate. I ran against the Democrats and the Republicans and I won. They outspent me, but I was able to debate them and that’s when Minnesota saw what a third option—one with socially liberal and fiscally conservative values—could do for the state.

As governor, I didn’t want to build a wall to keep people out. I tried to get the state legislature to look into legalizing hemp to bring more jobs to our agriculture industry. I also went to Cuba to try to normalize relations with our countries. At a time when Hillary Clinton was saying gay couples shouldn’t get married, I was giving state employees in domestic partnerships the ability to get equal medical coverage and benefits. Minnesota also had a budget surplus and I gave that money back to the people in the form of a tax rebate instead of hoarding it away so Democrats and Republicans could overspend. I also appointed judges and officials based on their qualifications—I really didn’t care which party they belonged to, I cared more about their competence. That’s the beauty of being a third-party candidate.

If you watched the DNC, you would have heard Al Franken speak; he’s a Democratic Senator for Minnesota. He ran for Senate in 2008 and he won the election by a mere 215 votes. Prior to that, he was a comedian on Saturday Night Live and in movies like The Coneheads and Trading Places. Today, he serves on the Judiciary, Energy, Indian Affairs and HELP Committees, and he was considered for Hillary Clinton’s VP pick. What were his qualifications when he ran for Senate back in 2008 and barely won? Well, when he ran for Senate, he was over 35 years of age and a resident of the state, which were the same qualifications I had when I ran for governor—except I was a mayor first, so again, I actually had experience in politics prior to running. I just decided not to make a career out of it because I believe there should be term limits. But that experience shouldn’t really matter in the first place because Minnesota’s state constitution states that no prior experience is necessary to run for office. When it comes to qualifications for president, the US Constitution is also simplistically clear: you must be 35 years of age or older, you must be a “natural-born” U.S. citizen (or for those born abroad, at least one parent must be a U.S. citizen at the time), and you must have lived in the United States for at least 14 years. That’s it.

When people talk about Hillary Clinton’s qualifications, Bernie Sanders’s qualifications, Donald Trump’s qualifications, they are omitting the third party’s qualifications. There’s a reason the Republicans destroyed the Reform Party: we were socially liberal and fiscally conservative. That’s what the Libertarians are today. That’s what the majority of Americans are too. No one is 100 percent conservative and no one is 100 percent liberal. That’s insane. Yet, that’s the system we have. But we don’t have to. I won the governor of Minnesota because enough people showed up and voted for me because I was a third option—a combination of conservative and liberal principles. I was polling less than 10 percent before I debated the two parties, and I proved that if a third party is allowed to debate the Dems and the Repubs, then a third party can beat them, against all odds.

This is why I don’t care if you think I’m throwing away my vote on Libertarian Presidential Candidate Gary Johnson—the former Governor of New Mexico who also has a former Governor as his VP—because quite frankly he’s socially liberal and fiscally conservative and that’s what I believe in. That’s why I ran third party. And I’m not about to go against my principles now. Do I want Trump to be president? No. Do I want Hillary to be president? No. But I want Gary Johnson to be president, and that’s why I’m voting for him. I showed the world that you don’t have to join them to beat them, you just have to be visible enough so people know you’re an option.

Gary Johnson is on the ballot in all 50 states. That alone should be enough of a reason for him to be included in the debates. And here’s another one: if Trump really thinks he’s qualified for president and if Hillary really thinks she’s qualified for president, then why don’t they prove it to the American people? As far as I’m concerned, neither candidate is qualified until we see how they measure up against the competition on a debate stage. Let’s see if they have the courage to do so.

My Reform Party might be dead and gone, but the principles of that party will never die as long as people are socially liberal and fiscally conservative—and guess what? In poll after poll, the majority of the country is exactly that! If you’re disgusted with how Bernie Sanders was treated, if you’re tired of money buying elections, then vote your principles. Vote your heart and conscience. I can’t thank the people of Minnesota enough for doing so back in 1998. If there ever was a year to vote third party, people, the time is now.

Jesse Ventura is a former governor of Minnesota and the author of several books including Sh*t Politicians Say: The Funniest, Dumbest, Most Outrageous Things Ever Uttered by Our Leaders and Jesse Ventura’s Marijuana Manifesto. He was a Navy SEAL and is a Vietnam veteran. He was also a professional wrestler from 1975 to 1986 under the ring name Jesse “The Body” Ventura.

Correction: The original version of this story misstated how the Sept. 11, 2001 hijackers entered the United States. They came into the U.S. from outside North America. 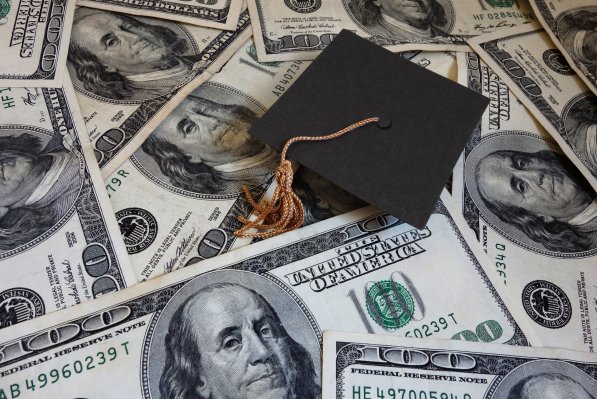 Paying Off Student Loans Just Got Easier
Next Up: Editor's Pick