Republican presidential nominee Donald Trump flashes a thumps up at the Gallogly Event Center on the campus of the University of Colorado on July 29, 2016 in Colorado Springs, Colorado.
Joe Mahoney—Getty Images

Donald Trump on Sunday insisted that Russian President Vladimir Putin will not “go into Ukraine” despite the fact that Putin took Crimea from the European country two years ago.

During an interview with ABC’s George Stephanopoulos on This Week, the Republican presidential nominee reiterated that he didn’t have a personal relationship with Putin, whose government is believed to be behind the Democratic National Committee email leaks, but that the U.S. would benefit from a good relationship with Russia.

Trump also addressed remarks he made recently suggesting that he would “look into” recognizing Russia’s annexation of Crimea and lifting the sanctions subsequently imposed on Russia.

“Well, he’s already there, isn’t he?” Stephanopoulos said in response, referring to Crimea.

“O.K., well, he’s there in a certain way. But I’m not there. You have Obama there. And frankly, that whole part of the world is a mess under Obama with all the strength that you’re talking about and all of the power of NATO and all of this,” Trump said. “In the meantime, he’s going away. He takes Crimea.”

“You know, the people of Crimea, from what I’ve heard, would rather be with Russia than where they were,” Trump later added. “And you have to look at that.” 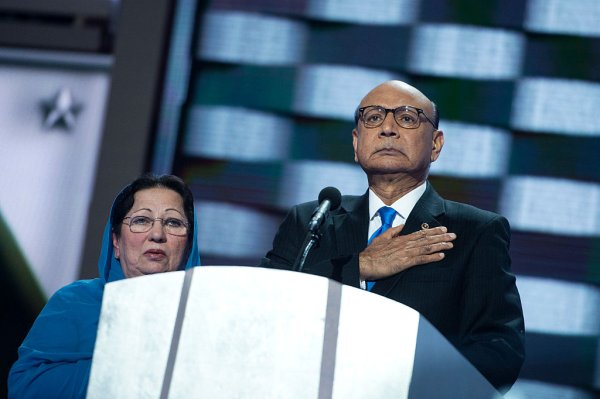 Muslim Soldier's Father: Trump Has No Soul
Next Up: Editor's Pick