Trump Says He Turned Down Koch Invite. Koch Aides Dispute He Got One.

It was like a bad version of “Who’s On First?” as top lieutenants of Charles and David Koch, the billionaire political patrons, tried on Saturday to intimate that Donald Trump was lying without ever saying the words.

As longtime Koch adviser Mark Holden sat down with invited reporters at a private donor summit here in Colorado Springs, Colo., Trump tweeted that he had turned down an invitation to address 400 Koch allies who ponied up at least $100,000 to attend this retreat. Holden, in a conference room with sweeping views of the Pikes Peak, said he was unaware of any contact between the network of political and advocacy groups that he chairs and Trump, the Republican nominee for President.

It was an example of how many Republicans cannot stand Donald Trump, but have little better regard for his Democratic rival, Hillary Clinton.

“I turned down a meeting with Charles and David Koch. Much better for them to meet with the puppets of politics, they will do much better!” Trump tweeted.

Holden did his best to shoot down that statement without exacerbating an already tense relationship with the billionaire real estate developer and his team. “We’re focused on the Senate. That’s where we can be most impactful and can drive the debate,” said Holden, the chairman of the Koch network known as Freedom Partners Chamber of Commerce and a senior executive with Koch Industries. Asked again about Trump’s tweet, Holden demurred: “You’ll have to talk with him about what his facts are and what he’s relying on.”

The afternoon session came as donors began arriving at the posh Broadmoor resort. A handful of reporters were invited to join select sessions and briefings in exchange for agreeing not to name conservative and libertarian donors who did not wish to be identified.

As a whole, the network of the ultra-rich is at best indifferent to Trump, and many have expressed disgust with his nomination. Many of the donors had favored Trump’s vanquished rivals, especially Wisconsin Gov. Scott Walker, Florida Sen. Marco Rubio and, to a lesser extent, Texas Sen. Ted Cruz. But Trump is now the nominee and the only thing standing between Clinton and a return to the White House.

Officials estimate that the pricetag for politics for the Koch groups will be somewhere around $250 million this cycle. The groups under the Koch umbrella—Americans for Prosperity, the Libre Initiative, Concerned Veterans for America and others—have 1,600 paid staffers in 38 states helping to organize 2.8 million activists.

The main focus, so far, has been five Senate races: Ohio, Pennsylvania, Wisconsin, Indiana and Nevada. The groups are ready to spend in a sixth, Florida, where Koch darling Rubio went back on his earlier statements to leave the Senate when his term expires this year.

(The groups, however, are not playing in New Hampshire, which is shaping up to be a brutal one. After running early ads, they walked away from Sen. Kelly Ayotte after she endorsed President Obama’s Clean Power Plan.)

So far, the groups have spent about $21 million in paid broadcast and digital ads, with another $21 million on the books through November. Some of those ads could feature Democratic nominee Hillary Clinton, but only if the Senate candidates are walking lockstep with her proposals, such as Ohio candidate Ted Strickland. The explicit goal is not to influence the White House race, but to keep the Senate in Republican hands as a check on whichever candidate triumphs in the presidential contest.

“Even the best wins aren’t going to change where we are as a society,” Holden said. “Whoever wins the White House, whoever has the Senate, whatever it looks like after Nov. 8, we’re still going to be focused on what we focus on.”

Broadly, those priorities are criminal justice, education and economic opportunity. To meet those goals, the network is aggressively anti-corporate welfare (to the detriment of its founding patrons), anti-regulation (to the benefit of them) and libertarian when it comes to education and free speech. During the three-day summit here, the donors will hear from House Speaker Paul Ryan, as well as hobnob with leaders such as Sens. Cory Gardner, Mike Lee, John Cornyn and Tim Scott, as well as Governor Walker.

Trump, who is no fan of leaders Charles and David Koch, is not among those welcome behind the gates of the sprawling Broadmoor compound. Holden met with Trump’s advisers earlier this year about the Kochs’ goals, but at best the relationship is public indifference. Trump has tweeted his hostility to the donors previously.

“It has to be a candidate we feel is aligned from a policy and values perspective and it needs to be in an area, a jurisdiction where we think we can bring something to the table, as far as boots on the ground,” Holden said.

He then quickly added: “To be clear, we have no intention going after Donald Trump.” Hence, his refusal to call out Trump’s tweet. 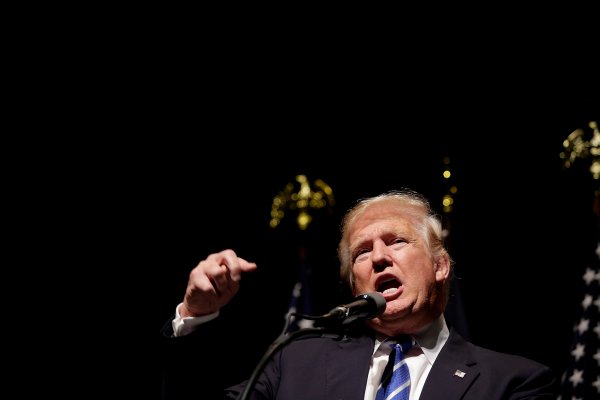 Donald Trump to Father of Fallen Muslim Soldier: 'I've Made a Lot of Sacrifices'
Next Up: Editor's Pick