Hillary Clinton delivers remarks during the Democratic National Convention on July 28, 2016.
Paul Morigi—WireImage/Getty Images
Ideas
By John Mueller
Mueller, a senior fellow at the Cato Institute and a political scientist at Ohio State University, is the author of Overblown, Atomic Obsession and, with Mark Stewart, Chasing Ghosts: The Policing of Terrorism and Are We Safe Enough?

In a poll conducted for Investor’s Business Daily last spring, 83 percent of respondents said they closely followed news stories about ISIS. And when those people were asked whether the group presented “a serious threat to the existence or survival of the US,” 77 percent agreed; more than two-thirds of them, strongly.

These numbers may be a bit inflated. The poll was conducted a week after ISIS claimed responsibility for the attack on the Brussels airport that killed 32 civilians. However, a question asked multiple times by CBS News and the New York Times (and catalogued by the Roper Center) after ISIS’s webcast beheadings of American hostages in 2014 and most recently in June 2016 found between 58 and 78 percent of those asked believed ISIS presented a major threat to U.S. security.

The Democrats decided to gamble that these fears will not prove consequential in the final vote and that a sunnier message will resonate with voters. Accordingly, they devoted their speeches to issues that someone who is convinced the country is in existential peril would consider to be moonbeams: love, empathy, justice, equality, diversity, togetherness, caring, nurturing.

ISIS only occasionally came up. Leon Panetta did note that their candidate had a plan to deal with ISIS, while Joe Biden simply denied the fear by proclaiming, “We don’t scare easily! We never bend! We never bow!”

In her acceptance speech, Hillary Clinton also mentioned that she had a plan—air-striking sanctuaries, furthering intelligence, disrupting the group’s online presence—but she had already sought to dismiss the fear by recycling FDR’s “the only thing we have to fear is fear itself.” Actually, if both that statement and the poll numbers are correct, we have a lot to fear.

Perhaps they felt they had little choice.

One possibility would have been to explain that, however vicious ISIS may be, it scarcely has the ability to present an existential threat to the United States. However, President Barack Obama has been trying to get that point across since early 2015. The polls obviously suggest that the argument, however sound, is not selling well.

Another would have been to point out that the U.S.-supported military campaign against ISIS in the Middle East is actually going quite well—and with scarce American casualties. Indeed, there are strong indications that, two years after proclaiming its caliphate and the start of a glorious new epoch in world history, the group is preparing its supporters for the possibility, even the likelihood, of total territorial collapse.

A problem for the Democrats is that optimistic progress reports could be savagely made to seem to be ridiculous if a single deluded ISIS sycophant goes on a murderous rampage in Peoria.

Eschewing moonbeams for lightning bolts, the Republicans played to the fears—but they did not create them. As stated above, the nation had those fears well before the RNC, and there seems to be little evidence that they are aware of the progress that has been made. And so in speech after speech, the Republicans proclaimed, “Our very existence is threatened!” Such sentiments clearly did animate the convention crowd waving signs that read, “Make America Safe Again.” The polls suggest that it likely found a large responsive audience outside the hall as well.

The choice, then, is between a candidate who seems to know ISIS is a problem and has a plan to deal with it—yet will be much more focused on what the alarmed would consider to be lesser issues—and one who, like three-quarters of the population, sees the threat as dire and immediate and will, in all likelihood, eventually come up with a plan to deal with it.

As one Democratic operative, who asked that the Washington Post not use his name, mused, “I believe love is stronger than hate, but fear wins elections.” 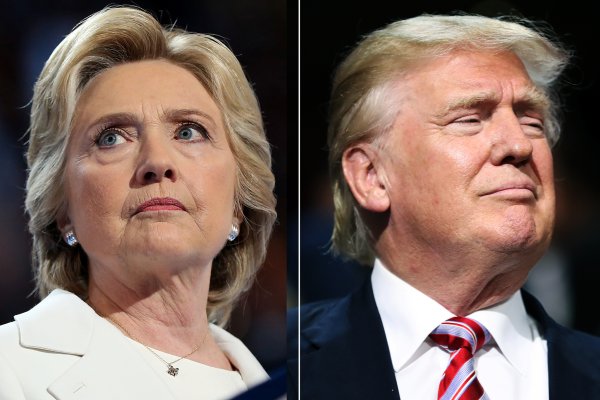 What Donald Trump and Hillary Clinton Can Learn From William James
Next Up: Editor's Pick