The day after Virginia Sen. Tim Kaine introduced himself to the nation at the Democratic National Convention, a certain metaphor has struck several people as just the right way to sum up the presence of Hillary Clinton’s VP pick: he’s a total dad.

It’s a word that conjures up different feelings for us all, but applied to Kaine, it appears to suggest a blithe cheesiness—a twinkle-eyed, soft-faced disposition that conveys sturdy competence yet lacks self-seriousness—all which makes people want to give him a fake punch right on the shoulder and utter classics like “you’re embarrassing me.”

This quality may never have been on better display than when Kaine took part in an event that most members of Congress would not dare to a few years ago: a spelling bee that pit lawmakers against Beltway journalists. See his first turn at the microphone as a case in point.

It was I who organized that bee, which served as a fundraiser for the National Press Club’s non-profit journalism arm. When I starting tossing the idea around—which was recreating a similar bee that happened at the Club exactly 100 years prior—several people responded like I was an endearing five-year-old who planned to bring about world peace by distributing cotton candy. Sure, cute idea, but what could possibly inspire lawmakers to risk humiliation, to offer up their intellects for insult? Just imagine what would have happened to Dan Quayle in the age of GIFs and memes!

It was exhausting, like planning a wedding but with way more disappointing emails. Over months, the planning committee sent requests to more than 250 members of Congress to see if they had interest in participating. And among a whole lot of radio silence and unfulfilled promises that the schedulers would get in touch soon, nine members of Congress and nine journalists agreed. Among them were three Democratic senators—Delaware’s Chris Coons, Connecticut’s Chris Murphy and Kaine—and Arizona Republican Sen. Jeff Flake.

Read More: This Is the Most Embarrassing Thing About Tim Kaine

Though I admire their willingness no matter what, I can’t say what exactly inspired this 4% of the Senate to agree to be asked spelling questions in public—what mix of nerdiness, confidence, altruism, playful humility or desire for publicity brought them to the stage. Though in Kaine’s case, one of the journalist-spellers may have nailed a key reason. As the Huffington Post’s Howard Fineman came up to spell his second word, he said a colleague had predicted dire outcomes for the reporters. “You’re nuts to do this,” he recounted his friend saying, “because politicians who agree to do this kind of thing really know how to spell. That’s a lineup of ringers.”

The whole evening was a delightful swirl of parody, friendly ribbing and schadenfreude. The crowd vacillated between side-splitting and nail-biting. But even among the lovable likes of CBS’ Major Garrett—who avowed that “This day will live in infamy!” before misspelling entrepreneur—and Virginia Rep. Gerry Connolly (“Epiglottis? I thought this was a family show.”), Kaine sticks out for his good-natured, dad-joking ways.

Also for his actual spelling. While Coons went down on inadvertent, Murphy got dinged on somnambulist and Flake did not survive malfeasance, Kaine whirled through the rounds and made time for stealing journalists’ glasses.

In the end, it came down to Kaine and two journalists, at which point he literally gets up and goes across the aisle.

The last 10 minutes are an intense back and forth, but Kaine eventually spelled nonpareil to come away with the title of “Best Speller in the United States,” as another member of Congress had 100 years before him. While he went away with a trophy, the crowd went away having been endeared to that dad-like fellow. His acceptance speech: “I will give this to someone else in 100 years.” 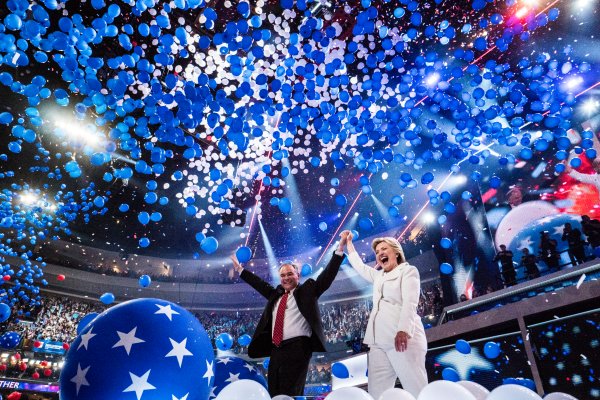 Hillary Clinton Accepts the Democratic Nomination at the DNC
Next Up: Editor's Pick