What makes someone a bad mother? If you ask the guys who made The Hangover—and really, why wouldn’t you?—it’s doing shots, falling off bar stools, taking down the bossy PTA president and going out in public with your kid’s spaghetti lunch dripping down your blouse. The new movie Bad Moms stars Mila Kunis as the frazzled, high-powered and single bad mom, and Kristen Bell as the sad-sack stay-at-home version. Their rebellion takes the form of booze, yelling and the embrace of the “bad mom” label, as a middle finger to a world in which the social pressure on mothers is constantly ratcheting up. But nobody gets hurt: as Kunis’ character admits, the struggle of these hyper-privileged moms to make their kids’ lives “amazing and magical” is absurd when they already are exactly that. Here, the stakes of being a less-than-perfect mother couldn’t be lower.

Historically, however, the “bad mom” was much more threatening: a danger to her children, her community, and even national security.

The idea that mothers were especially, perhaps uniquely responsible for the psychological health of their children—and therefore that “bad mothers” need to be feared, shamed and tamed—can be traced back to Sigmund Freud, whose theories became popular in the United States in the early 20th century. Not coincidentally, this was a period when women were agitating for the vote, taking a much more visible role in public life and generally refusing to be limited to a domestic, Victorian mode of all-consuming mothering. Anti-suffrage propaganda cartoons made a cliché of the image of the apron-wearing husband, who was left holding the crying baby as Mother marched out to demand her rights. A bad mom, in the 1910s, was one who put politics above family, and neglected her “natural” role as nurturer.

But a mother could also damage her children by loving them too much. In 1917, Theodore Roosevelt hit back at the popular anti-war anthem “I Didn’t Raise My Boy to Be a Soldier,” by accusing pacifist mothers of smothering their sons and turning them into dependent weaklings. This fear was profound, and only intensified during the Second World War, when the nation once again needed its mothers to be proud to let their boys march away. A 1942 TIME article explored the fate of children who were victims of their mothers’ “tight apron strings” and “excessive mothering,” reporting on a Manhattan psychiatrist’s study of some twenty “overprotective” mothers who were turning their children into either “sissies” or “tyrants.”

During the Cold War, psychologists, politicians and the media turned that private problem into a public menace. In the profoundly homophobic and red-panicked America of the early 1950s, it was a common fear that men who had grown up overly attached to their mothers would be unable to form adult heterosexual relationships, and that they would then prove particularly susceptible to the advances—and the blackmail threats—of Russian spies. How much more “bad” could a mother be, than to have a son who was gay and a Communist?

As the field of child psychology grew, the gap between neglect and smothering, where “good” mothering might live, correspondingly shrank—and the consequences for children became more frightening by the day. When Dr. Leo Kanner identified autism in 1943, his limited research sample suggested that children with the condition were most likely to belong to affluent, highly educated families. It was a short leap from that assumption to the influential theory of the “refrigerator mother,” which held that autism could be explained by—and blamed on—a child’s cold, distant, intellectual mother.

By the mid-1960s—in the wake of Betty Friedan’s Feminine Mystique and the “strange stirring” it diagnosed in wealthy, white American housewives—increasing numbers of women began to look at the world outside their homes and consider how they might change and contribute to it. But how far could a mother go, without going too far?

The question was dramatized in the spring of 1965 when Viola Liuzzo, a white, married mother of five, was spurred by television reports of the Selma-Montgomery marches to travel from her home in Michigan to Alabama to do her part for civil rights. On the night of March 25, she was shot and killed by members of the Ku Klux Klan on her way to pick up fellow activists at the Montgomery airport. In July, Ladies’ Home Journal convened a panel of white women to discuss her killing, but it was not interested in what they thought of the fight for which Liuzzo had given her life. The magazine wanted to know if its readers thought she was a bad mother for joining it. In a poll, it asked whether Liuzzo “had a right to leave her five children to risk her life for a social cause, or not?” Nationwide, more than 55% of readers said no, and just 26.4% said yes. The women of the panel told the magazine that they would never follow Liuzzo’s lead, unless they were fighting directly for their children’s welfare. They did not, needless to say, consider the “social cause” of civil rights to be a cause that had a direct impact on Liuzzo’s white family.

Liuzzo’s story highlights another side of the bad mother narrative: the question of how good the world thinks a mother ought to be. Through much of American history that’s been a measure of class and race, at least in the eyes of courts and newspapers. History shows many cases in which white, middle-class mothers have been the targets of concerned advice about how to mother properly, while African American, immigrant and poor mothers have faced a presumption of “badness”—often with dire consequences.

A century ago, in many parts of America, a young woman’s race, her poverty and her “bad” behavior could condemn her before she had the chance to be a mother. Beginning with Indiana in 1907, compulsory sterilization laws were on the books in some 30 states, and the controversial practice continued well into the 1970s. The 1927 Supreme Court case Buck v. Bell upheld Virginia’s policy of sterilizing women the state judged “feebleminded” or unfit to be mothers—a state generally “proven” by a woman’s poverty and sexual activity outside marriage. Although state-sponsored sterilization is now outlawed (as recently as 2014 in California prisons), experts on the child welfare system say its racial bias remains. Black families are still stereotyped as unstable, and black mothers as “irresponsible.”

But history also suggests an alternative to American hysteria about bad mothers who damage their children: In 1953, the British pediatrician Donald Winnicott published a paper that attempted to use psychoanalytic theories for a more generous view of mothering. After observing countless young children interacting with their parents, he rejected the extremes of “good” and “bad” mothering, replacing them with the more modest model of the “good-enough mother.” A “separate and independent entity” from her child, the good-enough mother does not enslave herself to her child’s every need—indeed, it’s essential that she does not, so that the child can learn to cope with the world. It is not an unreachable ideal, from which anyone who slips can be condemned as a “bad mom.” Instead, it suggests that “ordinary devotion” is what children need to thrive. That might not make for a compelling movie, but it might make for happier moms—and healthier kids. 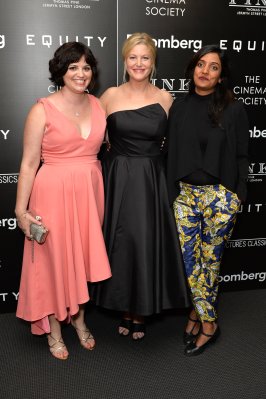 Equity's Filmmakers on Crafting a New Model for Women in the Workplace
Next Up: Editor's Pick