Meet the Ohio Senator Speaking at the Democratic Convention

Sen. Sherrod Brown (D-OH) speaks at a campaign rally for Democratic presidential candidate Hillary Clinton on June 13, 2016 in Cleveland, Ohio. Here, he's seen wearing his iconic canary in a cage lapel pin, which was given to him by Ohio steelworkers at a Workers' Memorial Day event in the 1990s.
Angelo Merendino—Getty Images
By Will Drabold

One of Hillary Clinton’s warm-up acts at the Democratic convention Thursday will be an Ohio Senator who was on the shortlist of her potential running mates.

Ohio Sen. Sherrod Brown is one of the leading progressives in the U.S. Senate, but he’s not well-known among many Americans.

Brown was elected at 22 to the Ohio House and eventually became Ohio’s Secretary of State before moving to the House and then the Senate in 2006.

Here are some things to know about Brown:

He voted against the Iraq war and fought passage of NAFTA. Americans for Democratic Action gave Brown a 95% liberal rating in 2014, putting him among the most liberal senators. Brown supports tighter regulation of Wall Street and stronger gun control laws and is often compared to Massachusetts Sen. Elizabeth Warren.

He was on Clinton’s vice presidential shortlist. The Senator was seen as someone who could unite the populist wing of the Democratic party behind Clinton, a nominee that some Senator Bernie Sanders supporters have not rallied behind. Brown endorsed Clinton and campaigned with her in Ohio, saying, “She has the best, thought-through trade and manufacturing policy.”

Democratic presidential candidate Hillary Clinton waves to supporters as she stands on stage with Sen. Sherrod Brown after speaking at a rally at a warehouse in Cleveland on June 13, 2016.
(Andrew Harnik—AP)

He is married to a Pulitzer-Prize winner. Connie Schultz won the prize in 2005 for a series of columns at the Cleveland Plain Dealer “that provided a voice for the underdog and the underprivileged.” She regularly tweets pictures of her husband and adds a personal side to the politician. 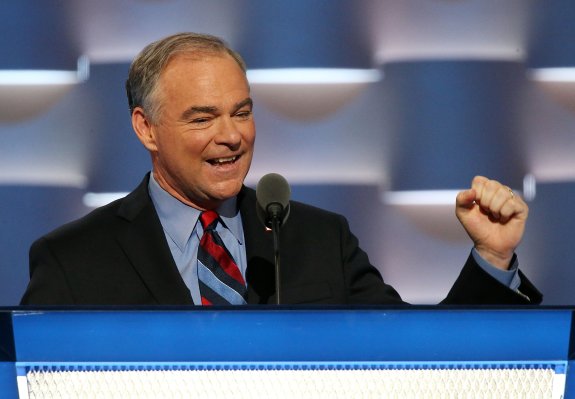 Here's What Democratic Delegates Thought of Tim Kaine's Debut
Next Up: Editor's Pick