Lessons From an American Mom in Turkey

Dr. Xanthe Scharff Ackerman is director of the Fuller Project for International Reporting and founder of Advancing Girls' Education in Africa

It’s been a gruesome summer in Istanbul, with the start of the tourist season marked by a triple suicide attack at Ataturk Airport, followed by the failed military coup of July 15. Turkey is under much criticism for serving as a rear operating base for ISIS and provoking a return to war with Kurdish guerrillas in the southeast. These polices, at the hand of an increasingly authoritarian president, have come home to roost, and Turkish citizens are paying a deadly price.

I recently returned to the U.S. after living in Turkey since early 2014. Relieved to be stateside, I think often of the parents I met while I was there.

My children were 2 and 4 when we arrived in Istanbul in 2014, and before we met other families, I’d cart them around the city, exploring playground after playground. On weekends, families camped out at the square in front of our house, loading not only food and blankets out of their vans, but also gas-fired teapots boiling Turk chai. While the city’s narrow cobblestone streets were bumper to bumper, a park was always within reach.

I’d never seen such a love of children as in Turkey. In one neighborhood, the mothers working at a community center convinced the governor to cordon off the block and convert it their own version of Sesame Street, complete with CCTV camera loop watched by the staff at the center so stay-home moms could do their shopping while their kids safely played.

Adoration was showered on my daughter and son as well. Walking the street, neighbors offered me blessings and them candy. Even packs of teen boys, putting on badass airs in leather and jeans, stopped to tousle my son’s hair. At their nursery, I fell short of the impossible standard set by Turkish mothers. They had a WhatsApp group where they exchanged as many as 60 messages a day, sharing advice and invitations, and planning gifts for the teachers.

Children were at the heart of everything in Turkey, even politics.

Already the premier since 2003, Turkish President Recep Tayyip Erodgan holds a long-term political vision, and children play a prominent role. He encourages women to have at least three, if not five children, and his party gives mothers gold coins and payments of increasing value with each additional newborn. He packs schools with party loyalists that share his emphasis on conservative Islam, ensuring influence over a next generation of voters.

Among the secular Turkish parents that I knew, anxiety steadily mounted about Erdogan’s overreaches and the imposition of religious education in public schools. On a mom’s night out, I learned which families were dual passport holders, and which secular-leaning elementary schools evaded the eye of the Ministry of Education.

Around the country, parents organized to try to preserve secular education in Turkey. Angry that more Sunni Islam classes had been added to the national curriculum, parents on Istanbul’s Asian side kept their kids out of school and instead staged a sit-in at a community center. In the spirit of the scientific and secular education guaranteed in the constitution, they’d planned chemistry demonstrations, drama and civil resistance workshops for the kids. As I went to observe the event, I passed a crowd of banner-waving teenagers marching to the Directorate of Education.

On the ferry ride home to our little apartment on the European side of the city, I rested my eyes on the white lights inside coastal homes, wondering how Turkish parents weighed the decision to involve children in politics rather than shield them.

But for some, it wasn’t a decision. In 2013, a few months before I arrived in Istanbul, the Gezi Park protests erupted in Istanbul and all around the country. Millions of Turks joined, streaming into the center of Istanbul and then camping for weeks. At first they were there to fight urbanization, but soon anti-government protestors from all walks joined the protest.

Berkin Elvan, a 14-year old Turkish boy, was on his way to buy bread for his mother when he was hit in the head by a police tear-gas canister. He died in 2014, after being in a coma for the better part of a year. Police brutality flared during the protests, invoking the condemnation of opposition politicians and foreign officials alike. Elvan unwittingly became the face of Gezi: a youth killed by a government that fears its own people. Erdogan called Elvan a thug and encouraged crowds to boo his mother.

After Gezi, the far-left United June Movement formed to fight Erodgan’s attempts to consolidate power. I interviewed a leader of the movement from a coffee shop on the ground floor of the communist headquarters. In the back, by the service station, his little daughter sung Soviet war chants to herself. His wife caught my eye and abruptly covered the girl’s mouth.

I rushed home that night to our little flat to play with the kids before bed. With my kids sleeping in the back, sometimes I’d go to the window facing the sea. Most weekends there were fireworks on the water, celebrating a birthday or a wedding on the Asian side by the military high school.

Now, when I think of that school, it’s not of fireworks, but of the 62 students being tried for treason by the Turkish state. This June, cadets as young as 14 were forced to participate in an attempted military coup. When it failed, they were arrested, along with 6,000 others. Their parents said they were lured to school with promises of meeting famous footballers.

Back in the U.S. now, readying the kids for school, I think often of the mothers I knew in Turkey. Their WhatsApp chats have turned from playdates to safety checks, and there’s no way to keep politics out of their homes. 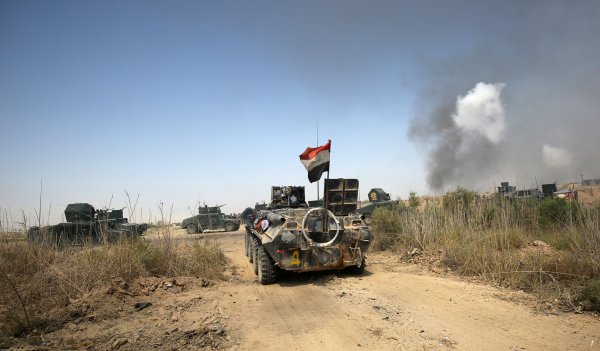 Why the Next President Must Regionalize Iraq
Next Up: Editor's Pick