Go Inside the Room at the Party Conventions With 360 Video

By Olivier Laurent and Josh Raab

Viewing on your phone? Watch HERE

As Ben Lowy walks around the convention floor at the Democratic National Convention, he’s stopped every few minutes by delegates and fellow photographers. “What’s that?” they all ask, pointing at his forehead. Mounted onto a headband, Lowy is wearing a device smaller than an iPhone that obscures part of his face.

The apparatus is one of Ricoh’s Theta S cameras, which can record 360-degree videos.

Photographer Ben Lowy with the Ricoh strapped securely to his head.
Landon Nordeman for TIME

For the past few days – both at the Republican and the Democratic conventions – Lowy has been capturing the hectic goings of a photographer on the floor of the biggest political events in the country. His goal is to offer a new perspective on the carefully scripted proceedings.

“When you’re covering politics or anything like this, it’s produced, it’s created for consumption,” says Lowy. “It’s the same old things happening, the same balloons, and the [audience] is apathetic. So, how do you get them to start looking?”

The answer, for Lowy, is to show them something new.

To achieve this, Lowy used two cameras: Google’s Jump rig, which stitches together the footage from 16 camera modules, and Ricoh’s Theta S. “The Theta offers a much lower resolution compared to Google’s Jump,” says Lowy. On the other hand, the Jump requires a 45-pound battery and can be too large for a crowded convention floor. With the Theta—and his customized headband—Lowy has been able to walk around the floor unencumbered and, he says, “I’m included in the footage. We can basically show the perspective of the photographer and include the photographer in the actual image.”

Lowy plans on continuing to use the Theta after the conventions close. “I’m the type of photographer that always tries new things and pushes the envelop in order to better communicate,” he says.

Ben Lowy is an award winning photojournalist and director. 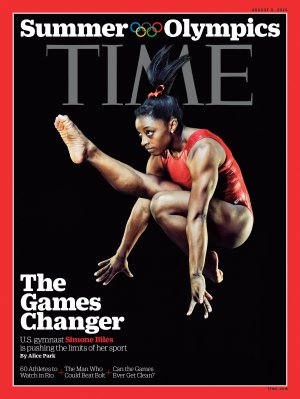 Behind TIME's Olympics Cover With Simone Biles
Next Up: Editor's Pick