“This is the real world that we live in,” said Bernie Sanders on the afternoon the Democratic National Convention opened. He was trying–unsuccessfully–to calm the cascade of boos and jeers from his supporters after he repeated his support for Hillary Clinton’s presidential campaign. Reality is not an easy sell in politics. For the first half of my professional life–the 25 years after the 1968 presidential campaign–liberal Democrats had trouble accepting political reality. Then it was the Republicans’ turn, a 25-year descent into xenophobia and hatred that culminated in the nomination of Donald Trump.

And so the crucial question for the Democrats in Philadelphia was the one posed, implicitly, by Sanders: accept reality or retreat into utopian fantasies. This is a particular problem for liberals, who dream of a better world, chockablock with better people; they tend, therefore, to be unduly optimistic about government’s potential to get things done. At its worst, this belief expresses itself in free-range griping. There are always grievances, and too often, the grievance-mongers take center stage; there is always racism and sexism and homophobia and economic inequality to rail against, and there always will be. One reason why Republicans took to wearing American flag lapel pins in the 1970s was to counter, and mock, the Democrats’ sense that the country was going to hell in a limo.

Now we have Trump trafficking in gloom, and the Democrats have an opportunity. The real story of the controversial opening day of their convention was not the resentment of the Sanders voters; it was that–for once–the party celebrated the progress that’s been made over the past 50 years. Before prime time, a parade of “other” Americans–blacks, Latinos, gays and the disabled–took the stage and, rather than laying out micromanaged agendas (the Democratic platform did that), told stories of uplift and inclusion.

These stories reflect reality too, though not one often recognized by Democrats or the media: the past 50 years have been an unprecedented period of human-rights progress. The success of the women’s movement has liberated vast springs of economic energy and creativity. The success of the gay-rights movement has radically diminished the sum of human anguish. The success of the civil rights movement and the newest generation of immigrants have created a country where, according to a 2015 poll, African Americans and Latinos are far more optimistic about the future than white people are, especially blue collar whites who toil in hourly-wage labor.

The triumphant Democratic stories culminated in Michelle Obama’s epic put-down of Trump: “Don’t let anyone ever tell you that this country is not great. That somehow we need to make it great again. Because this right now is the greatest country on earth.”

This is not a sentiment often heard at Sanders (or Trump) rallies. It exhilarated the convention hall, demolishing the anti-Hillary catcalls. It represents the best chance that Democrats have for winning this year; optimism usually beats pessimism in this country. Earlier, the comedian Sarah Silverman trashed the dead-enders: “Can I just say to the Bernie-or-bust people, you are being ridiculous.” But the real killer was Sanders himself, whose full-throated support for Clinton was a gracious surprise. Not only did Sanders say that Clinton “must” be elected President, but he restructured his familiar litany of issues to explain why she’d be better than Trump on each of them. In the hall, you could feel his most ardent supporters deflating–the TV cameras found a handful of people crying–as he offered the full Bernie, fingers fluttering to emphasize each word, in service of someone else. The logic of the speech, the reality of political compromise, was difficult to refute. This is not to say that the unreconstructed believers won’t prove an embarrassment for Clinton in the future, but they have been effectively marginalized by their leader to an angry sliver of left-liberal extremists. This is the precise opposite of what happened in Cleveland, where the angry sliver–well, it’s more of a slash–of Republicans were empowered.

I look at Bernie Sanders and see an Old Testament prophet kvetching about greed and corruption. There is a place for that in American politics, but not in the White House–just think of all the soothing Barack Obama has had to do these past eight years. When it counted, though, Sanders stowed his resentment and worked to mend the Democratic Party. “Reality” can be an excellent message in this moment of unenlightened heat. 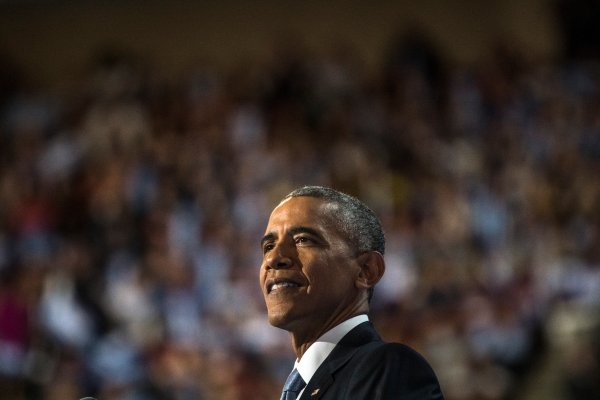 How the Obama Revolution Could Hurt Hillary Clinton
Next Up: Editor's Pick