A New Beach Volleyball Partnership Faces its Toughest Test Yet

Seconds after winning an Olympic gold medal, most athletes don’t start dreaming of the next one. But Kerri Walsh Jennings does. At the 2012 Olympics, in a patch of sand spread near Buckingham Palace, Walsh Jennings and her playing partner, Misty May-Treanor, had just clinched a third straight beach-volleyball gold. May-Treanor was planning to retire, but Walsh Jennings was sure she still had something left. And so while exchanging postmatch hugs with their vanquished opponents, fellow Americans April Ross and Jennifer Kessy, Walsh Jennings whispered to Ross, “Let’s go get gold in Rio.”

“I have no idea where it came from, truly,” Walsh Jennings says now, sitting on the sand in Manhattan Beach, Calif., before a June practice. “Something deep in my subconscious was just like, You’re going to want more.”

Ross signed on (Kessy planned to take time off to have a child), setting in motion an occasionally rocky journey that, if all goes according to plan, will culminate in Walsh Jennings’ winning a fourth consecutive Olympic gold on picturesque Copacabana Beach. Not that Ross, 34, and Walsh Jennings, who turns 38 on Aug. 15, have the champagne on ice. There have been injuries (a bum shoulder for Walsh Jennings) and growing pains. And Rio will present their toughest test yet.

American women have dominated recent Olympics, but Brazilians are wild for volleyball–only soccer is more popular. Nets line the city’s beaches, where natives play volleyball and futevôlei (with feet instead of hands) until sunset. Ross and Walsh Jennings are currently ranked third in the Olympics. The top two teams? Brazilians Larissa and Talita, and Barbara and Agatha. The crowds for those matches will be among the most raucous of the entire Games.”I love Brazil’s fans, even if they’re not rooting for me,” says Walsh Jennings. “They bring out our best.”

It’s never easy to step in for a legend. Ross grew up in Costa Mesa, Calif., and played indoor volleyball at USC, winning two national titles. But after three pro seasons in Puerto Rico, she quit the game, feeling beaten up physically and burned out mentally. After a summer as a House of Blues hostess, she took up beach volleyball and gradually became one of the best players in the world. And yet if she wins gold with Walsh Jennings, well, they’re supposed to. But if the team falls short, Ross is the variable. She’s no Misty.

Ross chafes at the comparison. “We’re a new team. We have our own expectations, so even if that’s what other people think, I don’t really care,” she says over lunch in Manhattan Beach. Ross is wearing a hat that says love, but questions about replacing May-Treanor clearly get to her. Indeed, spending time in their orbit, you quickly learn that replacement has become something of a banned word.

It’s not the only term visitors would be wise to avoid. The M word–Misty–is also off limits. It’s nothing personal against May-Treanor. But the pair feel pushing forward, never looking back, is key to success in Rio. “Never, ever compare,” says Walsh Jennings. “When I get the question between Misty and April, I want to scream. It just doesn’t serve any purpose. It holds April back, and it holds me back, because I’m in a new partnership to grow.”

Still, the pairing has taken time to jell. “We were just ugly in the beginning,” says Walsh Jennings. “We just got in our own way.” That wasn’t only on the court. Walsh Jennings and Ross have polar-opposite personalities. Ross is introverted and fiercely driven, while Walsh Jennings employs a friendlier touch. “April will kill, then she will say, ‘O.K., who I am killing next?'” says their Brazilian-born coach, Marcio Sicoli, a holdover from the May-Treanor squad. “Kerri will kill and come back and say, ‘Hey, are you O.K.?'”

The partnership has produced strong results—-the pair was undefeated on the U.S. pro tour in 2014—-but Sicoli sensed tension. “They couldn’t celebrate their differences,” he says. “That’s when you trust each other.” Sicoli says that after a shoulder injury benched Walsh Jennings last fall and threatened the team’s Rio qualification, the players began to bond more off the court. In January, they took something called the DiSC personality test. Ross scored higher in the D (Dominance) category (among the behaviors: “places emphasis on results,” “can be blunt”), while Walsh Jennings scored higher for i (influence–“likes to collaborate,” “places emphasis on relationships”).

Armed with empirical evidence of their differences, Walsh Jennings and Ross now easily poke fun at themselves. “I was lacking of D, which is shocking because I fancy myself a competitor,” says Walsh Jennings. “I want to be in the category of Kobe and Jordan. I was in, like, Mother Teresa.” She feigns disappointment. Next to her in the Manhattan Beach sand, Ross pumps her teammate up. “I think you’re a gnarly D,” says Ross. “She’s a BFD.”

Walsh Jennings cracks up. But Ross is spot-on. With its picturesque settings, exuberant crowds and, let’s not be naive, skimpy uniforms, women’s beach volleyball has become a marquee Olympic sport. And Walsh Jennings, an outgoing mother of three with a wicked spike, is its biggest star. Her wattage should only increase in Rio. Jim Bell, executive producer for NBC Olympics, calls the sport “hugely important” to its 2016 programming. “There will be lots of drums and music involved,” he says. “It’s a party.”

Training in California, with the Pacific Ocean pounding nearby, Walsh Jennings can envision the gold-medal match, which starts at midnight (Rio time) the morning of Aug. 18. “It’s going to be loud, it’s going to be beautiful, there’s going to be the Cristo statue in the background, with the light shining up on him,” she says. “We’re going to love it all. And we’re going to win.” 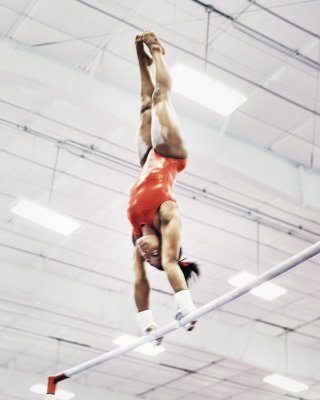 Simone Biles Is Taking Her Sport to New Heights
Next Up: Editor's Pick