Putin Is on a Foreign-Policy Winning Streak

Putin, center, poses with female graduates of military colleges at the Kremlin on June 28
ALEXEI DRUZHININ — EPA
By Ian Bremmer

This is a really good time to be Vladimir Putin. Others can offer evidence to confirm or refute the charge that he’s using cyberweapons to help Donald Trump beat Hillary Clinton, but there can be no doubt that he’s enjoying the speculation. American fears that Russia could steal the White House surely make him smile, particularly since he is convinced that Clinton incited protests against him in Moscow in 2011.

But his recent good fortune extends well beyond the U.S. Start with the Brexit vote, a big break for Russia in a time of sanctions. The U.K. has long been among the E.U.’s toughest Russia hawks. There will now be one less forceful voice in the room as E.U. leaders debate how to bolster Ukraine and punish bad Russian behavior. Sanctions will ease, and Russia can now more easily play the credible counterweight to an E.U. at risk of crack-up.

Whatever its worries about Putin and the U.S. election, the Obama Administration has had to give serious concessions to the Russian President on Syria’s civil war. The central question that has long divided the U.S. and Russian governments here is the fate of Syria’s Bashar Assad. He’s a Russian ally, but Washington wants him out. U.S. Secretary of State John Kerry recently announced a tentative agreement, without much detail yet, that would coordinate U.S.-Russia military strikes on the Nusra Front, made up of al-Qaeda-affiliated fighters who target Assad. The U.S. isn’t dropping its call for Assad to go, but in exchange for assistance fighting ISIS and pacifying Syria, the U.S. will help Russia attack the greatest threat to his survival. That legitimizes Russia’s role in the Middle East.

Then there are the developments in Turkey. Following the failed coup there, President Recep Tayyip Erdogan has declared war on enemies real and imagined. Thousands have been purged. More journalists have been jailed. Soldiers, police, judges, teachers, preachers and many others have lost their jobs. Erdogan says he’ll bring back Turkey’s death penalty by popular demand, while E.U. leaders warn that that move would halt Turkey’s process to join the E.U. Erdogan says he doesn’t care. Tired of Western criticism, Erdogan is repairing damaged relations with Putin, who is happy to have a strategically crucial NATO member who needs his political and economic support.

Luck never lasts, and Russia still has problems. The global oil price won’t rebound to the sky-high levels that lifted Russia’s economy during Putin’s first decade in power anytime soon. The country is not modernizing. And Russia’s one aircraft carrier still travels with a tugboat–just in case it breaks down.

But for now, things are going Vladimir Putin’s way, and there is light in the eyes behind that sly smile.□ 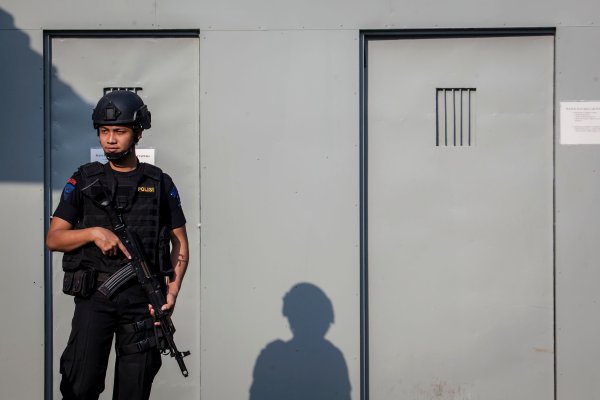 Indonesia Rejects Appeals to Halt 14 Executions
Next Up: Editor's Pick