Vladimir Putin in Moscow, in July 2016 (L); Julian Assange in the balcony of the Ecuadorian Embassy in London, in Feb. 2016 (C); Donald Trump in Cleveland, OH, in July 2016 (R).
Getty Images (3)
Ideas
By Elise Jordan
Jordan is a TIME columnist, an NBC News/MSNBC political analyst and a co-host of the Words Matter podcast.

This morning Donald Trump encouraged Russia to escalate cyberwar against his rival, former Secretary of State Hillary Clinton, while also contending that Russia is “probably not” responsible for the recent Wikileaks cache of hacked Democratic National Committee emails.

At worst, Trump is siding with a semi-hostile foreign nation against his domestic political opponent. At best, he’s being used as a dupe and a pawn of Putin and Assange, and escalating the uproar that his campaign is a puppet of Putin. (If his unstable comments are a desperate cry to steal attention from Clinton’s star-studded convention, it’s a scary precedent for how Trump would handle international relations.)

Though it’s clear why the Russians would hack the DNC—why not?—it’s unclear what they have to gain from revealing it. “Why would they release that they have the capability unless they are going full Tom Clancy and it’s blackmail,” a former Pentagon official speculated, pointing out that something worse might be in the missing Clinton emails from her time as Secretary of State. (The RNC and Clinton Foundation have also probably been hacked, unless they have markedly superior cybersecurity practices.) Is the Russian gamble to exploit Trump’s unpredictability as a vehicle to sow greater chaos in the American democratic process?

If Russia did pass along the hack to Wikileaks for publication, the escalation should ignite bi-partisan furor over blatant interference in the U.S. election—just as we should be outraged that Trump is encouraging it. Even without hard evidence of a Trump/Putin alliance, Democrats still have a strong case because Trump has a lobbyist problem.

Anger against entrenched special interests propelled Trump to win the Republican nomination, and it’s a strength Democrats know that Trump holds against Clinton. When it comes to opposing special interests, Trump bests Clinton by a margin of 20 percent. Perhaps most damning is that Democrats themselves give Clinton her lowest marks when it comes to taking on the Washington establishment and lobbyists.

But Trump’s man-crush on Putin could undo this strength, especially in the eyes of his conspiracy-minded supporters.

There’s big money to be made pitching pro-Putin clients, and that’s why the focus should be on what happened last week at the platform committee meeting at the Republican National Convention in Cleveland. Trump and his campaign have shown no interest in policy throughout the duration of this election. When a campaign is so flagrantly unconcerned with substance, it’s telling when they suddenly care, especially when his campaign is run by Paul Manafort, a lobbyist for numerous pro-Putin clients, including the deposed Ukraine President Viktor Yanukovych, a pro-Putin kleptocrat who now is in exile in Russia, and Oleg Deripaska, who American authorities denied a visa because of ties to organized crime. (Former Senator Majority Leader Bob Dole, who hired Manafort to run his 1996 bid, helped secure Deripaska’s visa for a $560,000 fee in 2005.)

A draft platform was circulated to the twenty members of the foreign policy sub-committee on the Sunday night before the RNC began. With amendments due at 7:30 a.m. Monday morning, and voting and debate to begin at 8 a.m., there was limited time to propose alternative policy, but the original draft was “weirdly silent on Ukraine,” a sub-committee delegate said.

The next morning, Texas delegate Diana Denman, a Reagan appointee and an election observer to Ukraine for the 1998 parliamentary elections, introduced an amendment calling for lethal defensive weapons for Ukraine. As Denman read it to the room, two Trump staffers at a side table stopped talking to each other to listen. When she concluded, the two staffers approached the committee co-chair, and the co-chair asked Denman to bring the amendment to him. The Trump staffers got on their cell phones.

The co-chair then tabled the amendment, telling the group that there were RNC and Trump campaign staff who would like to work with the sub-committee on the language before a vote.

It was the first and only time an amendment was tabled in this year’s foreign policy sub-committee. The two Trump staffers claimed to a delegate that they had to call and talk to “Mr. Trump”—perhaps name-dropping as obnoxious staffers, or perhaps Trump really was involved at the highest level with this particular amendment. The Trump staffers told the delegate that they had discussed Ukraine policy directly with Trump.

Before final approval of the platform, Denman again raised her Ukraine amendment; a pro-Trump delegate suggested modifying the language to include non-lethal assistance, which passed the committee.

“I didn’t realize what was happening at the time,” said a platform delegate. “Sending lethal defensive weapons shouldn’t be that controversial — the Obama administration and Donald Trump seem to be the only ones opposed.”

Another platform delegate offered another rationale: “I would think it would not be beneficial to Trump to let Manafort’s business life come into what is happening now in Trump’s future,” the delegate said.

A leading theory in Republican foreign policy circles is that Trump is so disengaged from policy that certainly the platform change was all Manafort’s doing. According to campaign finance reports, Manafort isn’t receiving a salary for his role on the Trump campaign.

“You think he’s doing this out of the goodness of his heart?” asked another Republican foreign policy advisor. “He’s setting up for afterward if Trump wins. It makes sense if one of his most recent contracts ever having to do with Ukraine, that he would look out for them.” That advisor was also involved with the Ukrainian elections in the 2000s and recalls Manafort’s efforts as supporting “the dark side” opposing democratization. (Manafort would be unlikely to qualify for the high-level security clearance necessary to work in the West Wing because of past foreign associations and would most plausibly re-enter the private sector after the campaign.)

“There’s part of me that thinks these leaks will ultimately help Hillary,” a veteran Republican strategist with experience working in former Soviet states told me. “This is all going to get caught up in the partisan nature of our race, but the truth is this is something that the Western alliance has to get their hands around. One of the first steps would be for Republicans to stand up and say this is unacceptable, political consequences be damned.”

Trump certainly won’t be taking sides against Putin. Like so many naive candidates who strut their way into the ring, Trump is confident he will finally be the true Putin-tamer, that they like each other and that Putin thinks highly of him.

I wonder how Trump will feel when Putin releases Trump’s tax returns. That won’t come until long after the election—Putin understands when’s got an ace in his hand. It will certainly come if Trump makes it to the White House, and not at the moment of his choosing. 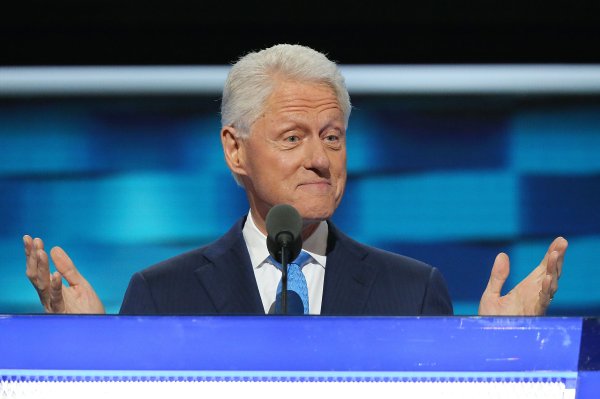 Why Bill's Love Message to Hillary Should Have Addressed Monica
Next Up: Editor's Pick