Donald Trump Doesn't Seem to Like Women Who Talk

Donald Trump does not like loud women. They don’t even have to be loud, necessarily; just women who speak when he would rather they not be permitted to speak. On Wednesday, Trump uttered a deeply inappropriate “Be quiet” to NBC’s Katy Tur, a reporter whose job it is to ask questions, during a press conference, the purpose of which is for journalists to ask questions.

If it feels like just days since Trump attacked a woman for doing something so audacious as talking, that is because it was. It has in fact only been two days since Trump declared that “Pocahontas” Elizabeth Warren has a “fresh mouth.” He’s made near-identical comments in the past, referencing the Massachusetts senator’s “big mouth“ as her only asset.

This kind of language is pretty typical for Trump, who often adopts a condescending tone when speaking about women who have, during the course of their life, expressed some sort of opinion coming out of their brains—or wherever.

Trump has called Hillary Clinton loud and shrill. He also defended the latter term, which is essentially a feminist slur at this point, by saying “I think the word ‘shrill’ doesn’t apply to women exclusively … I know men that are shrill,” which is interesting since my Google search for men Donald Trump calls “shrill” turned up zero such men. Shrill is a word reserved for women, especially women who are trying to make a point that men (and sometimes other women) would rather they not.

“My favorite part [of ‘Pulp Fiction’],” Trump wrote in his 2005 book TrumpNation: The Art of Being The Donald, “is when Sam has his gun out in the diner and he tells the guy to tell his girlfriend to shut up. Tell that b-tch to be cool. Say: ‘B-tch be cool.’ I love those lines.” 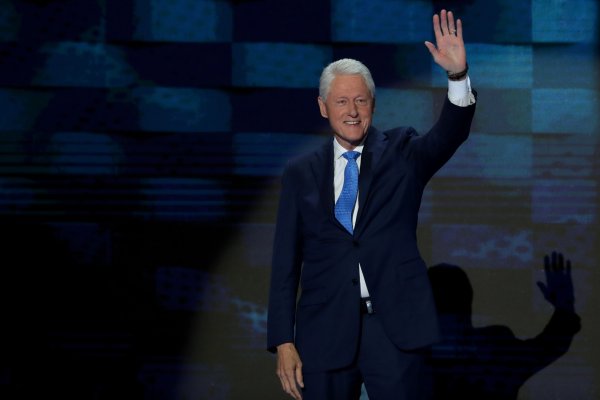 Bill Clinton's DNC Speech Was a Saxaphonic Love Song
Next Up: Editor's Pick