The first black President of the U.S. took the stage to support first woman presidential nominee of a major political party at the Democratic National Convention Wednesday night. Delegates chanted, “Yes We Can,” Barack Obama’s campaign slogan from 2008, as Obama spoke to the crowd in support of Hillary Clinton.

Obama, who walked out as “The City of Blinding Lights” by U2 rocked the arena in Philadelphia, offered a ringing endorsement of Clinton, his onetime primary competitor who became his Secretary of State, saying she would “blast through the glass ceiling.”

“Even in the midst of crisis, she listens to people. And she keeps her cool,” Obama said. “And no matter how much people try to knock her down, she never, ever quits. That is the Hillary I know.”

Obama also got in some digs at Republican presidential nominee Donald Trump, whose name was met with boos in the arena.

As “Signed, Sealed, Delivered” played at the end of Obama’s speech, Hillary Clinton emerged on stage. The former opponents touched foreheads and embraced before Obama put his arm around Clinton and led her to center stage. The two history-making presidential nominees held hands and waved as the crowd cheered.

Earlier, referencing Trump’s plan to build a wall at the Mexican border, Obama was cheered when he said Clinton “knows the American dream is something no wall will ever contain.”

Obama also made an overture to supporters of Senator Bernie Sanders.

“We all need to be as persistent as Bernie Sanders supporters have been during this election. We need to vote for Democrats up and down the ticket, and then hold them accountable until they get the job done. That’s right, feel the Bern!”

Obama looked back to the past as well, striking an optimistic note as he recalled the 2004 DNC speech that catapulted him to fame and ultimately to the presidency.

“Twelve years ago tonight, I addressed this convention for the very first time,” Obama said. “And while this nation has been tested by war and its been tested by recession, I stand before you again tonight, after almost two terms as your President, to tell you I am more optimistic about the future of America than ever before.”

Toward the end of his speech, Obama choked up as he described what has kept him going through his two terms in the White House.

“I’ve told Hillary, and I’ll tell you, what’s picked me back up every single time, it’s been you, the American people,” Obama said, adding later, “Now I’m ready to pass the baton.”

Before Obama’s speech, Virginia Sen. Tim Kaine accepted the vice presidential nomination, and he joined a range of leaders who offered impassioned messages of support for the Democratic nominee.

Kaine and Biden, like other speakers Wednesday night, also had sharp words for Trump.

“No major party nominee in the history of this nation has ever known less or has been less prepared to deal with our national security,” Biden said. “We cannot elect a man who exploits our fears of ISIS and other terrorists, who has no plan whatsoever to make us safer, a man who embraces the tactics of our enemies—torture, religious intolerance—you all know, all the Republicans know, that’s not who we are. It betrays our values.”

He did not stop there, adding Trump has “no clue, period.”

“How can there be pleasure in saying, You’re fired,” Biden said.

Clinton has yet to speak at the Philadelphia convention, where on Tuesday she became the first female nominee of either major party, but her surrogates have covered her bases. Nearly all of the major issues in this election have been addressed, and she has continued to emphasize the stark differences between her and Trump.

Wednesday’s schedule was no different: The theme was “Working Together,” and those who spoke included former New York City Mayor Michael Bloomberg, who also had sharp words for Trump.

“Donald Trump says he wants to run the country like he runs his business,” Bloomberg said. “God help us. I’m a New Yorker, and I know a con when I see one.”

Bloomberg, an Independent who considered his own presidential bid, said he chooses candidates based on their ability to do the job. “Whatever our disagreements may be, we must put them aside for the good of our country. We must unite around a candidate who can beat a dangerous demagogue,” Bloomberg said.

“[Clinton] is the right choice and the responsible choice in this election,” Bloomberg added, calling on “fellow Independents” to choose the best person to lead the country. “Hillary Clinton understands this is not reality television, this is reality!”

Much of the earlier part of the evening focused on gun control, with the family, friends and victims of gun violence making appearances onstage.

They included former U.S. Rep. Gabrielle Giffords, a former U.S. representative who was shot in the head in 2011 in her home state of Arizona in an incident that left six others dead, and Christine Leinonen, the mother of Christopher “Drew” Leinonen, who was killed in the June gay club shooting in Orlando that left 49 dead.

“The weapon that murdered my son fires 30 rounds in one minute. An Orlando city commissioner pointed out the terrible math. One minute per gun to fire so many shots, five minutes per bell to honor so many lives. I’m glad common-sense gun policy was in place when Christopher was born, but where was that common sense the day he died?” Leinonen asked.

In a short but powerful address, Giffords also backed Clinton.

“Speaking is difficult for me. But come January, I want to say these two words: Madam President,” Giffords said.

Ranging from immigration reform to addressing the needs of citizens with disabilities, the Clinton campaign has produced a steady stream of testimonials that have painted a picture of a candidate who is not only a “change maker,” as her husband put in on Tuesday night, but of a politician who has spent decades collecting the experience Democrats treasure in their nominee.

Clinton has also brought her primary rival, Sanders, into the fold, with the Vermont Senator even moving that she be nominated by acclamation in a moment of reconciliation.

Still, protests continue outside the convention, with some Sanders supporters saying they will continue the fight.

Former Maryland Governor and presidential hopeful Martin O’Malley made an energetic appearance as someone who has worked with and competed against Clinton. He gave her a shining endorsement as a protector, but, like many other speakers, spent a good amount of his short appearance attacking Trump.

“He will not fight for us. He feeds off of economic fears and failures, stirs up false divisions and ancient hates, turns anger into a political weapon,” O’Malley said.

He said Trump’s opinion of himself is “way too high,” a statement that got a positive response from the crowd.

“To hell with Trump’s American nightmare. We believe in the American dream,” O’Malley said. 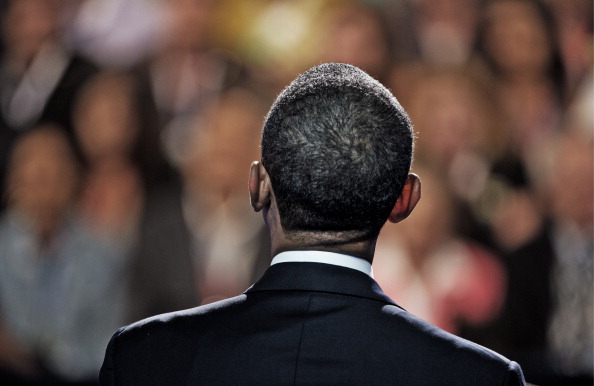