Bryan Cranston: Black Voters Are Being Silenced at the Polls

The most direct line we have as citizens of this great nation to the people who govern us is our inalienable right to pull the lever in the voting booth.

“The vote is the most powerful instrument ever devised by man for breaking down injustice and destroying the terrible walls which imprison men because they are different from other men,” were the wise words of former President Lyndon B. Johnson as he faced our nation’s most heated civil rights battle of the century.

When I played President LBJ in the stage and film versions of All The Way, I was portraying a leader whose commitment to civil rights led to the passage of two critically important bills: the Civil Rights Act of 1964 and the Voting Rights Act of 1965.

Those laws have been absorbed into our nation’s DNA over the past five decades, and most of us don’t give them a second thought. We simply enjoy the fruits of the labor of generations past. But at a time when we face some of the same tough challenges we did in 1964—around equal rights and race and access to voting during a presidential election year—it couldn’t be any more relevant to turn fully toward this important issue now.

President Johnson fought tooth and nail to ensure the clear passage of the Voting Rights Act so that all Americans would have an equal right to vote. Signed into law just days from now more than half a century ago, the measure put an end to harmful hangover voting practices that dated back to the Civil War era.

For decades after slavery ended, black voters were largely disenfranchised despite the 15th amendment to the Constitution. They faced disproportionate barriers to voting compared with their white counterparts, including polling taxes, literacy tests and red tape that prevented the vast majority of African Americans from being able to register to vote. Without that voice in government, decisions made by representatives were largely not in their name, which only caused further marginalization. As renowned American poet Emma Lazarus, whose words are forever etched on the Statue of Liberty, so aptly said: “Until we are all free, we are none of us free.” It’s in all of our best interests to ensure the voices of those most silenced are heard.

The Voting Rights Act, which LBJ signed into law on Aug. 6, 1965, sought to change the uneven playing field and to create a more perfect union. It was a treacherous and even deadly battle for folks on the ground fighting to get Congress to pass the law, but in its wake, we witnessed the glorious effects. Nearly half a million African American people signed up to vote within months of the Voting Rights Act becoming law. Courts upheld the Voting Rights Act, and Congresses in subsequent decades even strengthened its merits.

Until recently, that is.

In 2013, the Supreme Court in an appalling ruling in Shelby County v. Holder gutted the Voting Rights Act. It no longer has the same power, and as we face perhaps one of the most important elections in recent history, black voters are again finding themselves at a serious disadvantage.

In the presidential primaries this year, people from New York to California and many states in between—particularly people of color—were denied the right to vote and removed from voting rolls. We cannot let this become the first presidential election in 50 years without full protections for every voter.

We ought to examine those missteps as lessons to learn from, not impediments that stall us. We must use the mistakes of our past to guide the right decisions for our future. As President Johnson said: “Yesterday is not ours to recover, but tomorrow is ours to win or lose.”

The solution is within our grasp. There’s a measure before Congress, the Voting Rights Advancement Act, which aims to get us back on track. This new, flexible and forward-looking set of protections will repair much of the damage done by the court’s recent decision. It has bipartisan support. It’s the bill we need to stop discrimination at the polls.

We must not stand by as some Americans lose the hard-won civil right to vote. We must raise our collective voice to make certain that everyone has a say in our democracy. That’s the America that President Johnson envisioned when he signed the Voting Rights Act into law, and it’s the America we’re fighting for now.

And whomever you choose to vote for—please do VOTE! 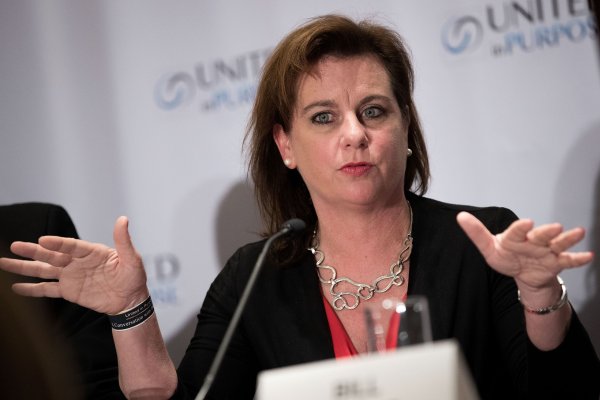 The Democratic Party Is More Extreme on Abortion Than Ever
Next Up: Editor's Pick