Mothers of the Movement Make Emotional Plea at Democratic Convention

There was at least one group of Hillary Clinton surrogates who would rather not have taken the stage at the Democratic national convention on Tuesday.

The mothers of Trayvon Martin, Michael Brown, Eric Garner, Sandra Bland and other African-American men and women who died at the hands of police, in police custody or from gun violence spoke about how they were brought into activism by their grief.

“The majority of police officers are good people doing a good job, and we’re asking, and we’re also going to keep using our voices and our votes to support leaders like Hillary Clinton, who will help us protect one another so that this club of heartbroken mothers stops growing,” said Lucy McBath, mother of Jordan Davis.

Read More: Transcript of the Mothers of the Movement at the Convention

The Mothers of the Movement, as they call themselves, made clear they were on stage to give their children a voice.

“This isn’t about being politically correct. This is about saving our children. That’s why we’re here tonight with Hillary Clinton, and that’s why, in memory of our childen, we are imploring you, all of you, to vote this election day. Hillary is one mother who can ensure our movement will succeed,” said Sybrina Fulton, mother of Trayvon Martin.

Watch the mothers speak in the video above. 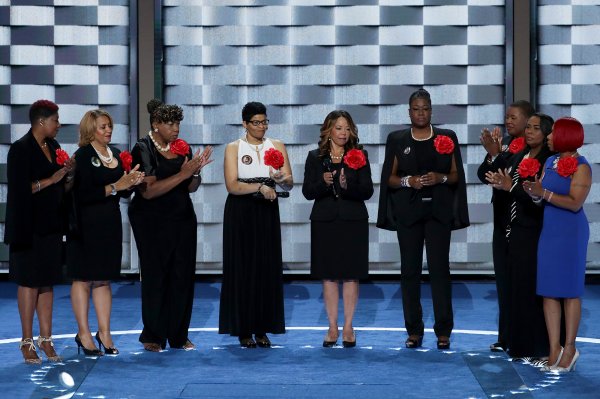 Read What the Mothers of the Movement Said at the Democratic Convention
Next Up: Editor's Pick