Protesters in Philadelphia marched from City Hall to the Democratic National Convention on Wednesday, with some demonstrating in favor of legalizing marijuana and others chanting their support for Vermont Sen. Bernie Sanders.

Various groups joined the march and gathered at the Wells Fargo Center to protest fracking, criticize the electoral process and accuse Hillary Clinton of corruption, among many other issues.

A large crowd also gathered to watch as two giant inflatable marijuana joints passed, with the words “Berned (sic) by the DNC” scrawled on at least one, video shows. A man in the footage can also be heard repeatedly screaming, “Pot reform! Prison reform!”

Sanders supporters can also be seen playing the bagpipe and banging on drums as several joined in to chant, “Bernie!”

Read More: Scenes of Protest and Peace from the Democratic Convention

TIME photographer Ben Lowy took to the streets to film our latest 3D 360-Degree video. Earlier this month, Lowy captured about 100 protesters outside of the Republican National Convention calling GOP nominee Donald Trump a “racist” and “embarrassment to America.” 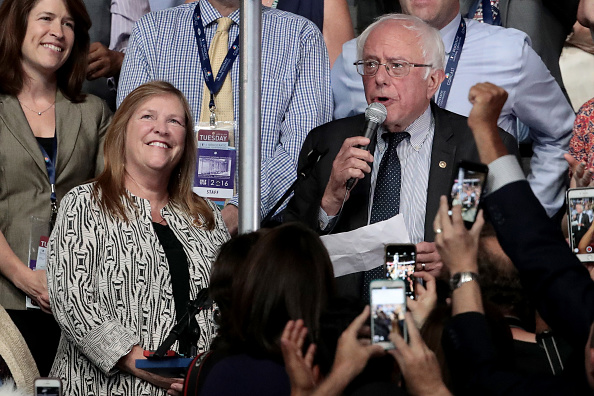