Actress Elizabeth Banks used her brief moment in the spotlight at the Democratic convention to mock Donald Trump.

A star in the Hunger Games and Pitch Perfect movies, Banks stepped on stage to Queen’s “We Are the Champions” while shrouded in white light and fog, the same way that Trump took the stage on the first night of the Republican convention.

“That was over the top,” Banks said.

“The Trump campaign is so hard up for money, I just bought that fog machine on eBay for 30 bucks,” Banks said. “I don’t feel good about it. I don’t.”

Banks, who is a host of the second night of the convention, then jokingly asked the crowd who was ready to “pound a few cheesesteaks” with her after the show.

See Banks’ entrance in the video above. 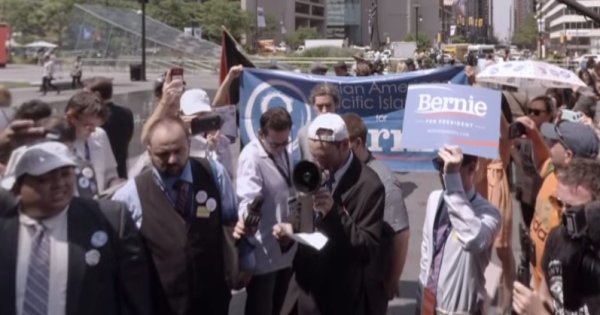 Go Inside a DNC Protest With This 3D 360-Degree Video
Next Up: Editor's Pick