Former Secretary of State Hillary Clinton made history Tuesday, becoming the first woman to be named the presidential nominee of a major political party.

The traditional roll call vote marked the end of the year-long primary process and the final stand for loyalists of Vermont Sen. Bernie Sanders. In a sign of party unity, Vermont was the last state to vote, calling for Clinton to win the nomination by acclamation.

Democratic Party officials and Clinton aides had been wary that Sanders’ more rambunctious delegates could throw off convention proceedings. Sanders has asked his supporters to back Hillary Clinton and called for the party to unify this summer.

Short-lived talks early Tuesday would have had Sanders formally nominate Clinton, but those fell through. Instead, Maryland Sen. Barbara Mikulski and Georgia Rep. John Lewis, two lawmakers whom Clinton has said she admires, and Na’ilah Amaru, a campaign contest winner, officially entered Clinton’s name into nomination.

Rep. Tulsi Gabbard, one of Sanders’ most prominent endorsers, entered his name into nomination, as Sanders’ nearly 1,900 delegates in the arena roared with applause. Despite appeals from Sanders, there were a few scattered boos in the audience and protest signs that said “Still Sanders” and “Election Fraud”.

For Sanders and his supporters, the roll call is a symbolic acknowledgement of the votes the Vermont Senator won during the primary. It was a ritual that Clinton chose to forego in the 2008 election, memorably moving to give Obama the nomination by acclamation as the New York delegation voted in Denver without a contest.

In many ways it was cathartic, as Larry Sanders, the candidate’s brother and a delegate from Democrats Abroad, broke into tears as he said their parents would have been proud of Senator Sanders’ campaign. The candidate too seemed to fight back tears.

Clinton will formally accept the nomination on Thursday evening, at which point DNC rules state she will officially become the party’s nominee for president. 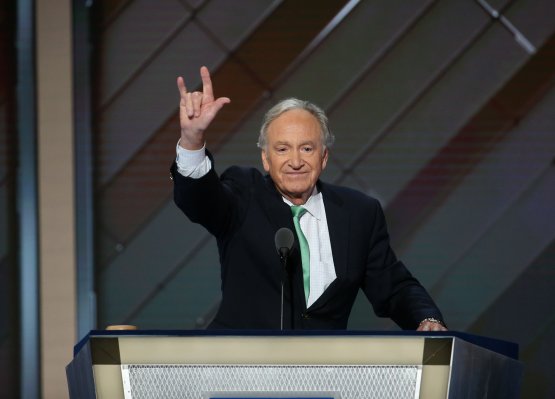 Watch Tom Harkin Show Delegates How to Sign 'America'
Next Up: Editor's Pick