Mothers of the Movement Help Unify a Divided Party

During a convention marked by rabid dissent, protests and walkouts, there was one thing Tuesday on which Bernie Sanders supporters and Hillary Clinton supporters could agree: Black Lives Matter.

In three emotional speeches Tuesday night, black mothers who had lost their sons to violence endorsed Hillary Clinton as the candidate they thought would be most likely to soothe the racial divisions that contributed to the deaths of their children. The respect for their obvious anguish was one of the first moments of unity in a convention that has been otherwise marked by dissent.

The grieving mothers, known as Mothers of the Movement, have previously met with Clinton and appeared in an ad for her campaign. But their primetime appearance at the Democratic National Convention Tuesday night was at once a powerful gesture to the African-American community and a repudiation of a Republican party that seems increasingly hostile to the Black Lives Matter movement.

Their appearance also nudged a fractured Democratic party towards a fragile unity. Racial justice is one of several issues on which both Clinton supporters and Sanders supporters tend to agree, and “Black Lives Matter” is perhaps the only activist chant regularly employed by both camps. So even after more than a hundred Sanders supporters staged a walk-out after the Vermont Senator threw his votes behind Clinton during the roll call, dozens came back inside specifically to hear the Mothers.

Read More: Transcript of the Mothers of the Movement at the Democratic Convention

As the six women walked onstage, the crowd began to chant “Black Lives Matter” for the first time since the convention began on Monday. “So many of our children are gone but they are not forgotten,” said Geneva Reed-Vead, mother of Sandra Bland, a 28-year old black woman who died in police custody last year, as she held back tears. “I am here with Hillary Clinton tonight because she is a leader and mother who will say our children’s names.”

“She isn’t afraid to sit at a table with grieving mothers and bear the full force of our anguish,”said Lucia McBath, mother of 17-year old Jordan Davis, who was killed by a white man in 2012 for playing music too loudly in his car. “Not only did she listen to our problems, she invited us to become a part of the solution. and that’s what we’re going to do.” They were also joined by Lezley McSpadden, mother of Michael Brown; Gwen Carr, mother of Eric Garner; and several others.

“This isn’t about being politically correct, this is about saving our children,” said Sabryna Fulton, mother of Trayvon Martin, who was killed in a racially-motivated confrontation in 2012. “That’s why we’re here tonight with Hillary Clinton. And thats why, in memory of our children, we are imploring you, all of you, to vote this election day. Hillary is one mother who can assure our movement will succeed.”

The appearance was one of few unifying events of the night, both energizing Clinton supporters and engaging Sanders supporters. It also presented an obvious difference from the GOP convention in Cleveland last week, where crowds chanted “Blue Lives Matter” and speakers condemned Black Lives Matter as a violent organization (most protests are peaceful).

For black delegates, the inclusion of the Mothers was a powerful repudiation of the hostile racial atmosphere they perceive in the Republican party. “Not to have that voice here would be almost ignoring it,” says Mia L. Jones, a Democratic State Representative and delegate from Florida. “She wanted us to know she’s not ignoring it.”

The gesture also helped the humanize Clinton in the eyes of many delegates. “It’s not just Hillary the candidate, it’s Hillary the mom, Hillary the wife, Hillary the person,” says LaKeshia Myers, a delegate from Wisconsin. Myers says that when Hillary visited Milwaukee, she asked to meet with the parents of Dontre Hamilton, another slain black man, “just so she could find out how they’re doing.”

Even some delegates who supported Bernie Sanders appreciated the significance of including the Mothers of the Movement in Tuesday’s program. “I think that it is certainly an important contrast for the Democratic Party to make with the Republican Party,” says Colin Byrd, a 23-year old Sanders delegate from Maryland. “As an African-American, this is the kind of thing that makes me feel safer and more secure when a Democrat is president.” Donald Trump, he says, has an “owner-slave mentality” about African American people in his orbit.

“I have two younger brothers that look like I do, and I don’t want my mother to become a Mother of the Movement,” said Julian Ivey, 20, also a Sanders delegate from Maryland. Keanuu Smith Brown, another young Maryland Sanders delegate, agreed, but he wants Hillary to be held accountable to the goals of the movement. “If she’s going to show off the support she’s gained from these mothers, she’s going to have to enact the policies she claims to be fighting for,” he says.

Still, all three Sanders delegates plan to vote for Hillary, not because of the endorsement of the Mothers, but out of a conviction that a Donald Trump presidency will be devastating for black Americans. “Any vote that isn’t for Hillary Clinton is a vote for Donald Trump,” Ivey says. 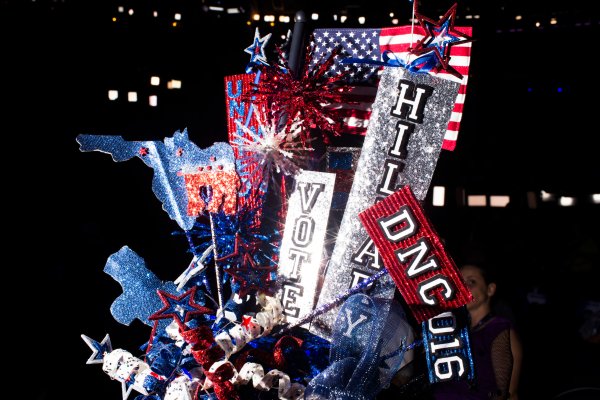