The father behind the pro-Donald Trump girl group, “USA Freedom Kids,” which went viral after a performance during a Florida rally earlier this year, now plans to sue the Republican presidential hopeful, he said Tuesday.

Jeff Popick, who manages the Florida-based singing group and wrote a song about Trump’s ability to crush America’s enemies, has consulted with an attorney to file a lawsuit against the Trump campaign for violating its agreement with the group. Popick, whose daughter Alexis leads the group, claims the campaign made promises to the group in exchange for their performances, including a booth at a rally to promote the girls’ albums, which never materialized.

“There is a legal issue here, but there also is a morality issue,” Popick told TIME on Tuesday. “It’s important that I, as a role model for the group, hold their feet to the fire.”

His song, which the girls performed in January during a show that became an internet sensation, was inspired by the real estate mogul’s “great heart and brilliant mind,” the manager said at the time.

“Apologies for freedom — I can’t handle this! When freedom rings, answer the call!” the girls sang while dancing around in flag-colored outfits. “On your feet, stand up tall! Freedom’s on our shoulders, USA! Enemies of freedom face the music. Come on boys, take them down!” they continued.

“President Donald Trump knows how to make America great. Deal from strength or get crushed every time.”

Popick said the “USA Freedom Kids” in January were promised a booth at the Pensacola, Florida rally during their break-through performance to pre-sell their album. When they got to the rally, there was no booth for them. “That never materialized,” he said. “We did, but they didn’t.”

The campaign then asked the girls to perform during a campaign event in Des Moines, Iowa. Popick said he paid out-of-pocket for the traveling expenses, but when the group arrived, the girls were told they weren’t going to perform. “We got to Des Moines and their plan quote-unquote changed and we were told to just sit in the audience,” he said.

Trump’s campaign did not immediately return a request for comment.

Now, after his experience with the Trump campaign, Popick said he is questioning whether he still believes in his lyrics. “I’m very saddened by it,” he said. “I’m not really sure what to think. The fact that what he’s done to my group, or lack thereof, doesn’t necessarily mean he wouldn’t be the right guy for president. I don’t know. Maybe I’m not the right person to make political commentary.”

The 54-year-old businessman has not yet decided how much to sue the campaign for, but said that he would not demand “billions of dollars.”

“I’ve asked and asked them for many months to make it right, and they haven’t, and if that means going the legal route, then so be it,” Popick said. 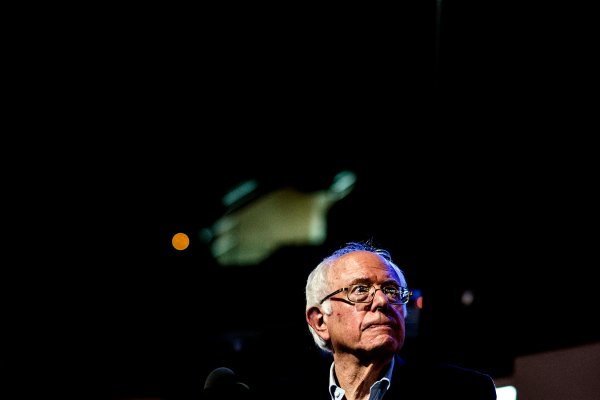 Bernie Sanders Seeks to Calm Supporters As Rebellion Falters
Next Up: Editor's Pick