Why the Next President Must Regionalize Iraq

Iraqi government forces drive their armoured vehicles during an operation, backed by air support from the US-led coalition, in Fallujah's southern Shuhada neighbourhood to retake the area from the Islamic State (IS) group on June 15, 2016.
Ahmad Al-Rubaye—AFP/Getty Images
Ideas
By Mark Pfeifle
Pfeifle was the deputy national security advisor for strategic communications and global outreach during the surge in Iraq from 2007 to 2009

Joe Biden, it seems, was ahead of his time.

In May 2006, then-Sen. Biden and foreign policy writer Leslie Gelb proposed a plan to divide Iraq into three semi-autonomous regions along sectarian lines. At the time, many dismissed and derided the proposal. Now, a long, deadly decade later, the next American president would be wise to embrace it.

Of course, 10 years ago, the Biden plan would have failed. It was built on a theory that didn’t fit the harsh realities on the ground. The country needed the 2007 surge—increased troops, intelligence and diplomacy brought unparalleled security. Then, the vacuum created after the 2011 withdrawal of U.S. troops led to enormous global insecurity with the creation of ISIS.

One of the many foreign policy challenges the next president will inherit is what to do about Iraq. It will be just as pressing as the continuing war on terror, because any peace in the struggle against terrorism requires addressing the dangerous imbalance in Iraq. The U.S., having twice invaded Iraq since 1991, has a more direct and immediate moral responsibility to shepherd a solution.

The same old, same old policy, however, will only extend the cycle of false starts and violence that has inflamed Iraq for nearly a generation. To that end, the next president must break sharply with conventional wisdom and make regionalization of Iraq a policy centerpiece.

In order to drive ISIS from the Iraqi regions it now occupies—about a third of the country—the local tribes must have a reason to rise up and defeat terrorists. U.S. and regional-led intelligence, special forces, information and psychological operations, and diplomatic assistance can accelerate the process.

This strategy worked during the Sawha, or Awakening, in 2007-2008 that gave birth to the Sons of Iraq, local Sunni volunteers organized in seven Iraqi provinces to protect their communities, and can work again if there is a credible promise made to Sunni Arabs—followed with clear and consistent policies.

Former Iraqi Prime Minister Nouri Maliki’s government, which enjoyed support from Washington and Tehran, broke its promises to the Sons of Iraq after they successfully drove al Qaeda in Iraq from Anbar providence and slammed shut sectarian progress, emboldened by the withdrawal of U.S. troops. These promises implied a greater degree of self-determination, yet Baghdad marginalized and effectively rubbed out the very groups that achieved victory over al Qaeda.

If Sunni Arabs are to destroy ISIS, they need the prospect, promise and potential of autonomy enjoyed by Iraqi Kurds for decades. Whether a mini-state, or a state, a new configuration in Western Iraq and possibly parts of Syria makes tremendous sense.

First, radical Islamic domination, such as an ISIS-imposed “caliphate,” is not something its constituents want, and survey data over the past decade clearly shows that Sunni Arabs are more secular in their outlook than Shi’a in Iran and those parts of Iraq that give spiritual and political fealty to Najaf.

Second, the number one issue for Sunni Arabs in the last 13 years (and most in the last five) has been their own security. In a perverse irony, some Mosul residents believe they are safer under ISIS today than they were under Baghdad’s control prior to June 2014, when more than a hundred thousand U.S.-trained Iraqi troops dropped their weapons and ran from a few hundred ISIS fighters. Yet they would be safest under their own self-determination, and the people of West Iraq know this well.

Third, and most critically from a regional perspective, Iran’s outsized influence beyond its borders today, in a geographic crescent that stretches to the Mediterranean, could eventually trigger a new regional or world war.

Creating an autonomous area for Sunni Arabs in Western Iraq, which they will share with Christians, Yazidis and other religious minorities who have been indigenous to these lands for centuries, is in the interests of all but one of the regional powers: Iran. Turkey, Jordan, Saudi Arabia and the Gulf states share an interest in regional stability, and Syria requires a neighboring ally for its own secular Sunni population if it, too, is eventually to stabilize.

While Iran will fight such a plan, America’s next president faces an important choice: Is subservience to Tehran’s ambitions in the region’s interests, or those of the U.S.? Was President Obama’s nuclear deal limited to containing Iran’s break-out capacity, as its advocates in the “echo chamber” insist, or was it part of a broader, and dangerous shift in U.S. policy to a strategic alliance with a regime that continues to call for the annihilation of Israel and pacification of what it still calls the “Great Satan”?

These are some of the heavy questions awaiting the next commander-in-chief.

For Hillary Clinton, it offers a successful finality to her controversial vote to invade Iraq, vindication for her hawkish advisors and the fulfillment of her campaign rhetoric to be a decisive problem-solver. For Donald Trump, this is the ultimate Art of the Deal, showing he can act differently from the despised establishment.

Doing the right thing in this instance doesn’t require “nation-building” or “regime change.” Rather Washington—to the extent we’re still relevant—must simply give regional actors permission to do what is just and rational.

So, if President Clinton or President Trump wants to spare their eventual successor a similar burden, they should start by seeing Iraq for what it is and not what they want it to be. And they should thank Mr. Biden for his foresight. 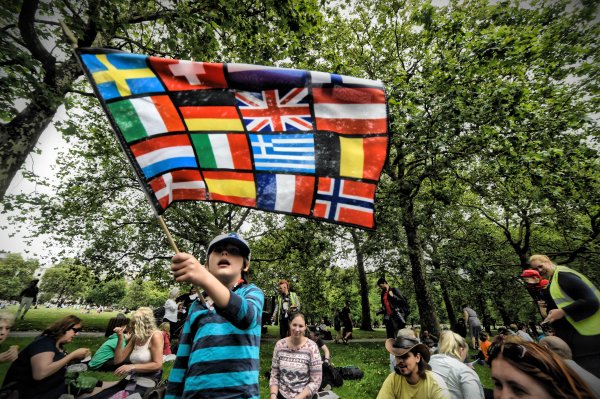 Europe’s Anti-Border Culture Will Survive in a Post-Brexit World
Next Up: Editor's Pick