Amid fears that Bernie Sanders’ delegates would again seek to disrupt proceedings on the floor of the Democratic Convention on Tuesday, the Vermont senator visited with state delegations to Philadelphia to corral them into supporting Hillary Clinton and calm their anger before the gavel opens the convention again.

Sanders’ effort was part of a full-court press to unify the Democratic Party after a fractious showing on Monday night, when booing, dissent and angry Sanders delegates stole the spotlight from much of the convention proceedings.

“It is easy to boo,” Sanders told the California delegation on Tuesday morning in central Philadelphia ahead of a roll call vote on the convention floor. “But it’s harder to look your kids in the face who would be living under Donald Trump.”

Meanwhile, saddened Sanders delegates appeared to be out of options for a mechanism to fundamentally alter the convention’s path. They failed on Tuesday to bring forth a vote that would nominate an alternative for vice president to Sen. Tim Kaine, and Sanders himself had little patience for floor maneuvering.

Talks were briefly underway to have Sanders enter Clinton’s name into nomination, but those fell through. Under the Clinton team’s latest plan, Senator Barbara Mikulski, Congressman John Lewis, and Na’ilah Amaru, the winner of a campaign contest, will officially nominate Hillary Clinton to be the Democratic nominee for president, and three other another speakers will nominate Sen. Sanders. The roll call of the states will be read, allowing each state’s pledged and unpledged delegates to be counted—a key demand of Sanders’ supporters.

When Vermont’s turn comes up, a Sanders spokesman says the state’s delegation will pass, sending them to the back of the line. After the remaining delegations have been tallied, Vermont is expected to formally call for Clinton’s nomination by acclimation—a display that Democrats are hoping will demonstrate party unity. Clinton communications director Jen Palmieri said Tuesday morning that it expects Kaine’s nomination to be approved by acclimation.

Without a clear alternative plan, some Sanders supporters sounded a note of resignation. It seemed unlikely they would be able to bring any significant, organized action to the floor of the convention on Tuesday, when there will be a roll call of votes for Sanders and Clinton and each delegation ticks off its states votes.

“I accept that electing Hillary Clinton is better than electing Donald Trump,” said Donna Smith, executive director of the Progressive Democrats of America, who sought to organize an effort to topple Sen. Kaine. “I accept that.”

Still, with the Democratic convention in its second day, Sanders is struggling to regain control over the supporters he inspired to fight against a “rigged” system during the Democratic primary. The roll call vote could provide an opportunity for grandstanding Sanders delegates and further disorder.

Sanders visited delegations on Tuesday morning including those from New York, California, Kansas, Wisconsin and Alaska among others. He pledged to back Clinton as the nominee even while reaffirming that his political revolution must continue.

“There is no debate that we must defeat the worst Republican candidate in the modern history of this country,” Sanders said to the delegation from New York. The “first task,” Sanders told the delegation, is to elect Clinton. The second, Sanders said, is to “continue the political revolution.”

“All of us have got to do everything we can to elect Secretary Clinton,” Sanders told the Missouri delegation.

Sanders’ delegates are often loosely affiliated and not well organized, making it difficult to line them up behind the Democratic Party. They were unruly during the first day of the convention, dramatically booing down Clinton endorsers and disrupting convention proceedings. Sanders still has significant influence with his base and plans to use it.

Angry about the nomination for vice president of Virginia Sen. Tim Kaine, many Sanders supporters who consider Kaine too moderate and question his support for the Trans Pacific Partnership sought to nominate a replacement. But they were unable to acquire the necessary paperwork in time, and the measure failed.

The Sanders delegates refused to say which vice presidential nominee they had found to try to replace Kaine, except that he or she was not an elected official. And they conceded that the motion would likely not have succeeded.

“We’ve got our feet on the ground. We understand it would be a symbolic protest,” said Norman Solomon, a Sanders delegate from California and the coordinator of the Bernie Delegates Network.

Last night, Sanders sought to quell his supporters’ anger. “Our credibility as a movement will be damaged by booing, turning of backs, walking out or other similar displays,” Sanders said in a text message to some of his delegates last night. The missive appeared to calm many of his supporters, who grew quieter towards the end of the night. Still, some Sanders delegates pointedly ignored his plea.

“I chose not to pass that information along to my fellow New Mexico Bernie delegates,” said Teva Gabis-Levine, a Sanders delegate whip from New Mexico who received instructions from Sanders.

The anger over the Democratic National Committee’s apparent favoring of Clinton during the primary—shown through the leak of party emails—has not subsided. “There’s been discourse for weeks about what to do,” Solomon told reporters, “but I don’t know what’s going to happen.” 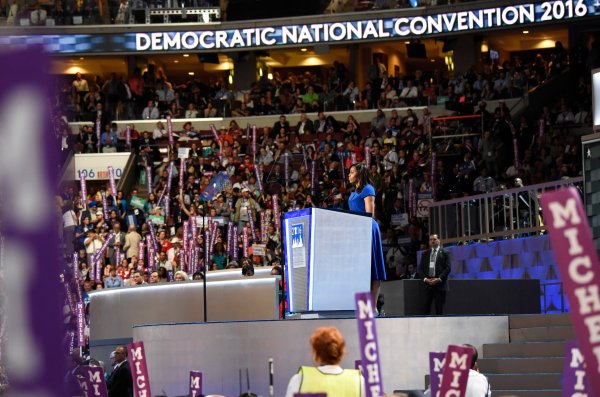 Democratic Convention Beats Republicans in the Ratings on First Night
Next Up: Editor's Pick