This image was acquired by Philae’s CIVA camera 1 at the final landing site Abydos, on the small lobe of Comet 67P/Churyumov–Gerasimenko, on Nov. 13, 2014.
ESA/Rosetta/Philae/CIVA
By Mahita Gajanan

Philae, the first robot to land on a comet, has reached the end of its life and is bidding a final farewell to Earth through a series of sad tweets.

“It’s time for me to say goodbye,” Philae tweeted on Tuesday. “Tomorrow, the unit on @ESA_Rosetta for communication with me will be switched off forever…”

After launching from a Rosetta probe, Philae landed on 67P/Churyumov-Gerasimenko in November 2014, becoming the first spacecraft to touch down on a comet. However, landing trouble led Philae to bounce across the landscape of the comet, finally settling down in a location about a kilometer away from its intended target, in the shadow of a cliff. As a result, the probe received only 1.5 hours of sunlight for every 12-hour rotation—not enough power to replenish its battery.

Philae project manager Stephan Ulamec announced in February 2016 that the time to say goodbye to the probe was fast approaching. The lander provided valuable data during the 57 hours it operated on battery power, but entered a hibernation period shortly after, waking only once for a brief period in July 2015.

Team members on the Philae lander project announced Tuesday that the Electrical Support System on Rosetta, which is used to communicate with Philae, will be turned off to save energy before Sept. 30, the day the mission will officially end. They encouraged fans of the lonely robot to send a picture saying goodbye to Philae. 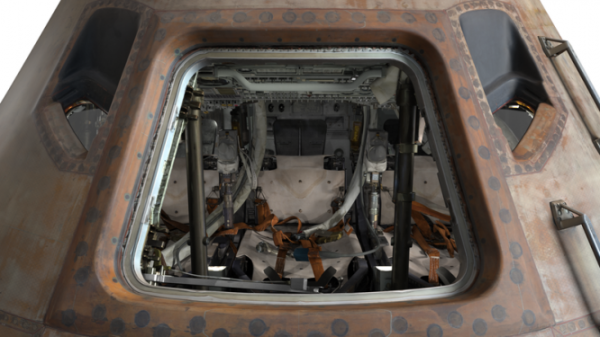 What Was the Apollo 11 Spacecraft Like? Climb Inside in 3D
Next Up: Editor's Pick