Kendall Jenner Is Ditching Her Bras and Freeing the Nipple

The Kardashian klan has long been outspoken about positive body image. Just take it from family leader Kim Kardashian, whose nude selfie made waves on Twitter as she defended the desire to embrace her own body. Khloé has also been in the body-positive spotlight with her book, Strong Looks Better Naked and her workout-filled Snapchat feeds (because the best way to learn about the Kardashians is via Snapchat, right?)

Now, model Kendall Jenner is following in her older sisters’ footsteps by defending her bra-free lifestyle. In a post on her site called “Free the Nipple,” Jenner wrote, “I really don’t see what the big deal is with going braless!”

“I think it’s cool and I really just don’t care!” she continued. “It’s sexy, it’s comfortable, and I’m cool with my breasts. That’s it!”

Jenner also used the post to promote some of her favorite jewelry pieces, saying that her transparent shirts are “a fun way to show off my different nipple rings!” She added: “Jacquie Aiche made me a couple of pieces that are really sick—like a pair of angel wings. Keep scrolling to check out some of my favorite ways to decorate your freed nipple! ;)”

Although Jenner didn’t acknowledge the formal “Free the Nipple” movement, Lina Esco would probably be on her side regarding this issue. In fact, Esco spoke with Motto earlier this year about the censorship of Kim Kardashian’s nude photo. “It’s absurd that it’s 2016 and we still need to censor one of the most natural organs of a woman’s body,” she said. “Being topless does not equal nudity. Why is it that you can sell women’s breasts but we can’t wear them?” 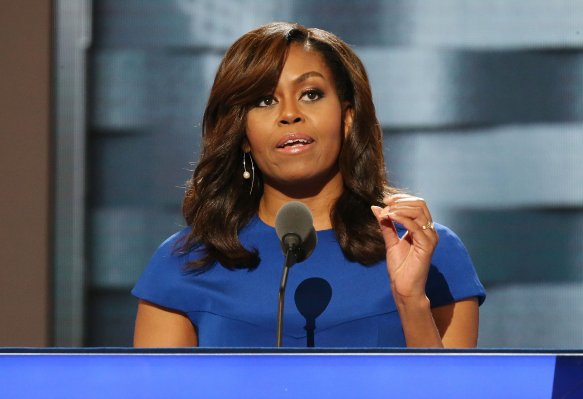 Michelle Obama's 5 Best Quotes at DNC: 'I Wake Up Every Morning in a House That Was Built by Slaves'
Next Up: Editor's Pick