Bernie Sanders Has Lost Control of His Political Revolution

It was supposed to be the night the Democratic Party finally exorcised its demons. Instead, on a sultry, hot day in Philadelphia, the long-simmering disillusionment of Bernie Sanders supporters erupted into anger. And not even the Senator himself could calm them.

A day of protests, booing and open dissent on Monday at the Democratic convention threatened to derail the party’s moment in the spotlight, exposing the fault lines that have divided the Democrats throughout the contentious primary between Sanders and Hillary Clinton. Inside the DNC convention hall, Sanders’ delegates shouted “Bernie! Bernie!” booed Clinton surrogates and even briefly broke into the “Lock Her Up!” chant favored by Donald Trump supporters.

One thing became clear: Sanders, who has spent the past 15 months condemning a “rigged system” and lambasting Clinton’s Establishment credentials, has conjured a spirit of resentment that he can’t dispel. He succeeded in creating a political revolution, but like many revolutionaries, he may have lost control of it.

Protesters convene in Franklin Roosevelt Park outside the Democratic National Convention at the Wells Fargo Center on July 25, 2016, in Philadelphia.
Natalie Keyssar for TIME

When Sanders took the stage at the end of the night, the crowd was standing for well over two minutes, and some supporters burst into tears as he spoke. “I understand that many people here in this convention hall and around the country are disappointed about the final results of the nominating process,” Sanders told an emotional crowd. But, he said, “Hillary Clinton must become the next President of the United States.”

Even as he implored his supporters to back Clinton, some delegates responded by saying, “We want Bernie!”

Read More: Meet the ‘Bernie or Bust’ Delegates at the Democratic Convention

Still, Sanders sought to corral his supporters. “Our job now is to see that platform implemented by a Democratic Senate, a Democratic House and a Hillary Clinton presidency,” Sanders said. “And I am going to do everything I can to make that happen.”

Throughout the day, his campaign fought to control its rambunctious delegations, sending texts to supporters urging them to toe the line. “Our credibility as a movement will be damaged by booing, turning of backs, walking out or other similar displays,” Sanders said in a text to his delegates. “We want the party to unify to elect Hillary Clinton and defeat Donald Trump,” Sanders campaign manager Jeff Weaver said in a brief interview. “I think emotions are running high right now, but as time goes by it’ll begin to calm down.”

There were some moments of unity in the night. In an effort to quell unrest, the Democratic Party lined up a slate of liberal party leaders to speak on the first night, including Massachusetts Senator Elizabeth Warren and Representative Raúl Grijalva, as well as bridge-builders such as First Lady Michelle Obama and Senator Al Franken. Comedian and Sanders supporter Sarah Silverman told the crowd she would vote for Hillary “with gusto.” At a high point in the evening, Paul Simon—whose song “America” was used to great effect in a Sanders ad — appeared to sing “Bridge Over Troubled Water.”

But after the hack of the Democratic Party’s emails revealed what many Sanders supporters had long suspected — that the Democratic Party favored Clinton over Sanders — the dissent was difficult to contain. Many felt their votes had been stolen by a “rigged” party system, and one Sanders delegate even wore a piece of white tape over her mouth bearing the word “silenced.”

When Democratic delegates walked into the convention, they were jeered by an angry crowd yelling chants about the DNC leak: “The DNC is rotten! They lied to us!” one man said, and “Shame on the DNC!” “Bernie beats Trump!” chanted groups of others, in reference to general-election polls that showed Sanders ahead of Trump in hypothetical matchups.

Other Bernie-or-Bust protesters around Philadelphia also made it clear they had no intention of falling in line behind Clinton. Supporters gathered and shouted in front of city hall in near-100-degree weather on Monday, holding hand-made signs and carrying a massive inflatable joint emblazoned with the words, “Berned by the DNC.” One supporter risked heatstroke by wearing a onesie printed with Sanders’ face; another went nude from the waist up except for her nipple pasties, which were shaped like pot leaves.

Indianapolis artist Michael Sparks has a “Bernie Sanders” tattoo on one side of his head and a “Jill Stein” tattoo on the other side. He sees the choice between Clinton and Trump as “four years of a buffoon vs. eight years of a genocidal warmonger.” And the threat of a Trump presidency isn’t enough to sway his vote. Sparks doubts Trump will actually deport Muslims or immigrants, and argues that if he’s elected, it will be a “suitable payback for what the DNC has done to voters like me.”

As his supporters marched across the city, Sanders struggled to maintain control of his delegates. In shirtsleeves on a hot afternoon before the convention officially began, he repeated his endorsement of Clinton and was angrily shouted down. “We have got to defeat Donald Trump, and we have got to elect Hillary Clinton and Tim Kaine,” Sanders said, spurring a long and angry response from his delegates. “We want Bernie!” the crowd chanted. During his prime-time speech, some of his supporters repeated the chant. His wife Jane Sanders admitted their influence over their supporters was limited. “Well, I don’t think we’ve ever had control over our supporters nor have we ever tried,” she said in an interview with NBC.

That lack of control has some Clinton delegates worried that vehement Sanders supporters could throw the election to Trump. “Trump is using some of the negativity Bernie Sanders used against Hillary, and now Bernie supporters are doing the same thing,” says Bobbie Jean Anderson, a Clinton delegate from California. “I get frightened. I have nightmares that I wake up and Trump is President.”

Sanders has undoubtedly had the same fears, and for months has told his supporters that the most important aim in November is to defeat Trump. “It is no secret that Hillary Clinton and I disagree on a number of issues. That’s what this campaign has been about. That’s what democracy is about,” Sanders told the audience in the convention center. “Hillary Clinton will make an outstanding President, and I am proud to stand with her here tonight.” He vowed to campaign against Trump in the fall, saying he would badly damage the country.

Still, the foot soldiers were unconvinced.

“Abraham, Moses, Jesus and Muhammad could appear before a burning bush and hand me a stone tablet with lightning and everything that said ‘Vote for Hillary,’ and I would choose hell because it’s the same thing,” said Brian Seligman, a delegate from California and former U.S. Marine and computer engineer. “I’m not voting for her.” 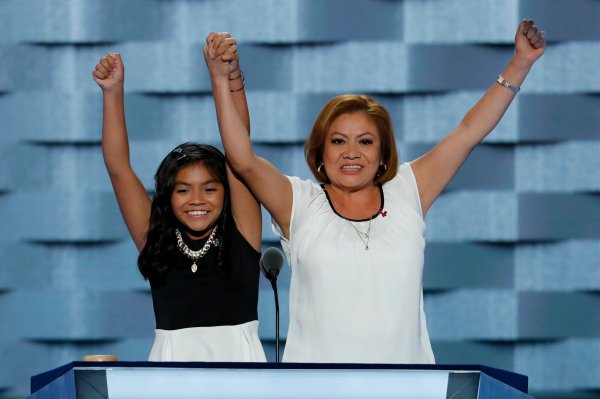 Watch This 11-Year-Old Daughter Of Immigrants Speak At The Democratic Convention
Next Up: Editor's Pick