Democratic Convention Back on Message in Primetime

The Democratic National Convention was off to a rocky start before it even had a chance to get started, but by the time primetime rolled around on Monday night in Philadelphia, Democrats were back on-message.

While the convention opened with boos and protests from upset supporters of Vermont Sen. Bernie Sanders, the protests had mostly quieted by the time the night’s keynote speakers took the stage.

Sanders came out to a huge applause, thanking his supporters for helping him win 1,846 delegates before turning his focus to Hillary Clinton.

“[B]ased on her ideas and her leadership – Hillary Clinton must become the next president of the United States,” he said to cheers. “The choice is not even close.”

Sanders stayed on message with no lack of compliments for Clinton, spilling long into the 11 p.m. EST hour. While his speech aroused a lot of emotion from his supporters, he was able to make a comprehensive call for unity.

Not only did he push his supporters in Clinton’s direction, he rallied all Democrats against Trump: “This election is about which candidate understands the real problems facing this country and has offered real solutions – not just bombast, not just fear-mongering, not just name-calling and divisiveness.”

New Jersey Sen. Cory Booker, First Lady Michelle Obama and Massachusetts Sen. Elizabeth Warren all gave well-received speeches, although chants broke out during parts of their speeches, as when a group of disgruntled delegates shouted “We trusted you!” at Warren.

Obama’s speech had some in the audience in tears, as she spoke about waking up every day in a house built by slaves and talked about the importance of role models in national politics.

“Because of Hillary Clinton my daughters now take for granted that a woman can be President of the United States,” Obama said.

Warren took to the stage to bash Donald Trump and unite Democrats around Clinton.

“Trump’s entire campaign is just one more late-night Trump informercial. Hand over your money, your jobs, your children’s future, and the great Trump hot-air machine will reveal all the answers.” Warren said. “And for one low low price, he’ll even throw in a goofy hat.”

Democrats had said the convention would be more optimistic than the Republican national convention, which featured speakers warning of the dangers of terrorism and crime. The primetime speakers mostly stuck to that message, reserving their fire for Republican nominee Trump. 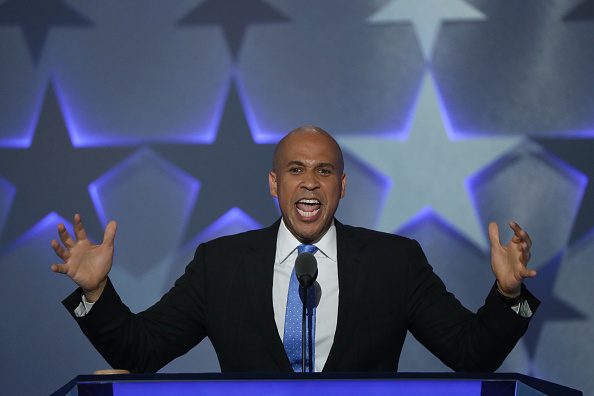 Read Cory Booker's Speech at the Democratic Convention
Next Up: Editor's Pick