Meet the 'Bernie or Bust' Delegates at the Democratic Convention

The leader of one of the nation’s largest unions was addressing the Democratic delegates on Monday evening, when Gabriel McArthur couldn’t hold his tongue any longer.

“No confidence,” the 24-year-old delegate from Northglenn, Colorado, shouted over the crowd. Standing on the floor of the convention hall, he shook his head and crossed his arms. He was hardly alone in shouting down speakers as Democrats’ first day of a nominating convention that is expected to tap Hillary Clinton. Any time she or running mate Tim Kaine were mentioned, some Bernie Sanders delegates broke into rage and erupted at the speakers.

“Look at the polls. The Republicans are going to beat her,” McArthur said, still holding onto hope that Sanders could win the nomination despite lacking enough support among delegates. “She’s not the nominee yet. Have we had a vote? No. It’s gross that we have to listen to this garbage as if she’s the nominee. She isn’t.”

McArthur’s voice was hardly unique. The opening hours of the convention were chaotic, with delegates shouting through pro-Clinton speeches and even the opening prayer. Some Sanders supporters were still musing how they could deny Clinton the nomination, or perhaps force her to pick a different running mate. Sanders has endorsed Clinton and urged his supporters—many of them new to politics—to fall in line. Few heeded his direction and some doubted if Sanders really wanted them to do so.

“I will knock on doors for local and state candidates,” said Jenna Fontaine, a Southport, N.C., resident who lived in Vermont for 35 years. She was wearing a Bernie ’96 button a “Thank You, Bernie” T-shirt. “But don’t ask me to do anything for her. She hasn’t earned it.”

Here, the 68-year-old woman paused for a moment to say the obvious. “I’m feeling raw and bitter,” she said.

That high level of emotion carried through other delegates. David Weeda, a 57-year-old delegate who runs a solar-powered bed-and-breakfast in Bucksport, Maine, broke into tears when discussing Sanders. “She hasn’t won this yet. It’s disrespectful to expect me to sit there and listen to everyone call her the nominee. She isn’t,” he said, saying the unrest is the fault of the pro-Clinton speakers. “It’s on them. There are 1,900 of us (Sanders supporters) here. Are we invisible to them?”

The self-described street activist wants to block Trump from the White House. But he isn’t sure that he can stomach a vote for Clinton. “I’ll see what I can do in my heart,” Weeda said. He, like so many delegates, returned to polling that, at this point, means little more than rationalizing for Sanders friends. “Bernie defeats Trump really easily. I don’t know what we’re doing with her,” he said.

The polls, however, show these holdouts are in the minority. A Pew poll finds 90% of Sanders’ supporters had shifted to Clinton.

For most of the night, the Clinton-coordinated public face of the convention allowed the Sanders supporters to vent. Then comedienne Sarah Silverman said from the podium what many Clinton aides were thinking in private. “To the Bernie or Bust people, you are being ridiculous. I have so much more I want to say,” the former Sanders supporter said as she endorsed Clinton.

The feisty tone left some Sanders delegates a bit uneasy. “I would like to see it toned down a bit. We can have a productive discussion without the antics. Booing isn’t going to do anything,” Maine state Rep. Deane Rykerson said. Wearing a green felt hat fashioned after Robin Hood, he understood the #BernieOrBust crowd. “When I was 20-years-old, I would have said those things, too,” the Kittery resident said. But he’s been voting for the candidate, in his word, who is “the lesser of two evils,” he said, “and she isn’t that evil.”

There’s no persuading people like McArthur, the Colorado delegate who shouted down American Federation of Teachers chief Randi Weingarten. “I would rather fight with the right candidate and lose, than win with the wrong one,” McArthur said, a first-time convention attendee. “If she loses to Trump by one vote—mine—then she has bigger problems.” 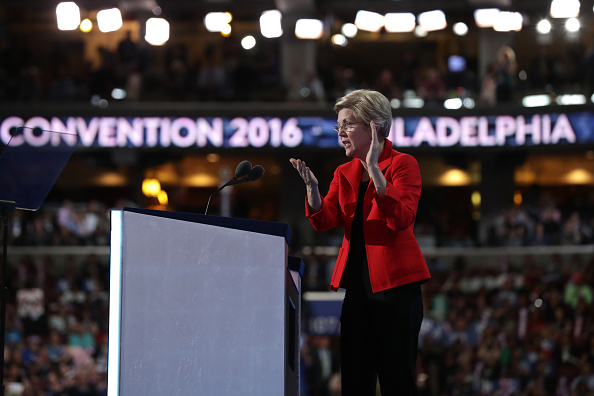 Read Elizabeth Warren's Anti-Trump Speech at the Convention
Next Up: Editor's Pick