Democrats Had Some Palabras for Voters at the Convention

Karla Ortiz, 11, and her mother, Francisca Ortiz, walk out on stage to deliver remarks on the first day of the Democratic National Convention at the Wells Fargo Center, July 25, 2016 in Philadelphia.
Alex Wong—Getty Images

Speakers at the Democratic national convention had some words for undecided voters—in Spanish.

A half-dozen people on stage in Philadelphia on the opening night of the convention Monday added a phrase in Spanish to their remarks to help highlight the party’s differences with Republican nominee Donald Trump.

They won’t be the only ones either, as both speakers and the crowd favored the phrase “Sí, se puede”—roughly equivalent to President Obama’s campaign slogan “Yes, We Can”—and vice presidential candidate Tim Kaine also speaks Spanish.

Here are some of the things that were said on stage.

Ten-year-old Karla spoke about her fears about her parents, who are undocumented citizens, being deported with phrases in Spanish sprinkled in. She and her mother both addressed the crowd in Spanish at the end: “The immigration system needs to be better so that families can be together and reach the American dream,” Francisca, Karla’s mother, said.

The Illinois congressman ended on a note whose tone did not need any translation: “Together with Hillary Clinton, we’ll make this nation greater, better and stronger,” he said in Spanish after critiquing Republican nominee Donald Trump’s policies.

Lily Eskelsen Garcia, president of the National Education Association, delivers remarks on the first day of the Democratic National Convention at the Wells Fargo Center on July 25, 2016 in Philadelphia.
Alex Wong—Getty Images

The national education association president opened her speech about immigration with a quick line in Spanish, saluting to Spanish-speakers by wishing them a good afternoon.

The California congresswoman told the story of her parents moving from Mexico. “Hillary has always supported us, and she needs us. We need to back her and vote in the November elections,” Sanchez said in Spanish.

This DREAMer spoke after a montage of Trump making statements that have been criticized for being culturally insensitive. She also spoke about her immigration journey with small phrases in Spanish mixed in. 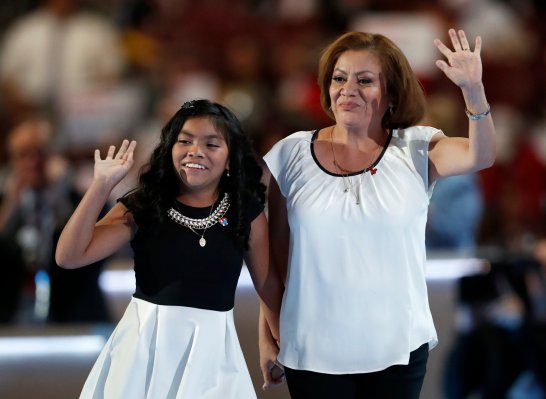 Meet the Speakers at the Democratic Convention Monday
Next Up: Editor's Pick