A 25-year-old press secretary named Sarah McBride will make history Thursday as the first openly transgender person to speak at a major party’s convention. TIME spoke to her about why transgender people are now being discussed, what it means that this is happening in 2016 and how she interpreted the messages Republicans were sending at their convention last week. The following has been edited for brevity and clarity.

TIME: What does it mean to you to make this speech?

Sarah McBride: I am moved and inspired that there will be a chance for someone on a stage at a national convention to say that they are a transgender person. And my hope is that for anyone who is watching, who worries that their dreams and their identity are mutually exclusive, who worry about whether they can be accepted and succeed as who they are, that they can find some comfort and some hope in the fact that a person will be standing on that stage saying those words.

What were the first thoughts that went through your mind when you found out you’d have this historic speaking role?

The first was that I hope I do my community proud and do right by them. But this is a moment where it’s not about me. It’s about the leaders of our country and the DNC recognizing that trans people and trans voices matter. This is an opportunity to demonstrate to the delegates at the convention—and to anyone watching at home—that as we have this discussion around trans equality and trans issues nationally, that we can never forget that behind those debates and those dialogues are real people that hurt when they are made fun of, that hurt when they are targeted for discrimination and that have the same dreams and aspirations as everyone else.

Why are people hearing so much about transgender issues in 2016?

We’ve been building our political voice. We’ve been building our political infrastructure. And more and more people have been coming out. More and more Americans know someone who is transgender … It was past time for the part of the community that didn’t get as much attention to finally be in the spotlight. The Obama administration looked at the challenges faced by transgender Americans and came to the conclusion that there were steps they should be taking. And in response to that advancement—and in response to the historic marriage equality decision—anti-LGBTQ activists and some conservative politicians decided they needed to move on to a new vulnerable group to target.

Sarah McBride poses for a portrait at the Wells Fargo Center where she is attending Democratic National Convention on July 25, 2016 in Philadelphia.
Natalie Keyssar for TIME

What do people misunderstand most about what it means to be transgender?

People forget our humanity. And people are still understanding what it means and what it’s like to know that you’re transgender. People are still wrapping their minds around that concept, and I think we have to continue to educate folks about that. There’s both a need for underscoring our humanity and a need for the community to tell our stories, why we are who we are. Talking about how transitioning helped us, how coming out helped us, how being true to ourselves, in a lot of instances, saved our lives.

Republicans sent some mixed messages about LGBT issues last week. The platform has been derided as anti-LGBT, yet billionaire Peter Thiel took the stage and said he was proud to be gay to general applause. The platform committee wouldn’t include that acronym in any plank, but Trump said ‘LGBTQ’ more than once.

There’s no question in my mind that the Republican convention and Donald Trump’s campaign were sending a message of hate and division and discrimination. We are long past the point where merely acknowledging our existence and that, frankly, we shouldn’t be killed, should be seen as progress. The party adopted, without much opposition, a platform that endorsed practically every anti-LGBTQ position they could endorse.

Many people are confused about why bathroom access is so important for transgender people.

Whenever you tell a group of people that they can’t use bathrooms, or they can’t access spaces that other people use, that is dehumanizing. It is discriminatory, and it reinforces the stigma and the prejudices that the transgender community already faces. The reason why access to facilities—and access to public spaces—is so important is because it’s much more difficult to go to work, to go to school, to participate in the public marketplace if you can’t access bathrooms that make sense for you, that match who you are. At the end of the day, this isn’t just about access to bathrooms. This is about transgender people fully and equally participating in public life. 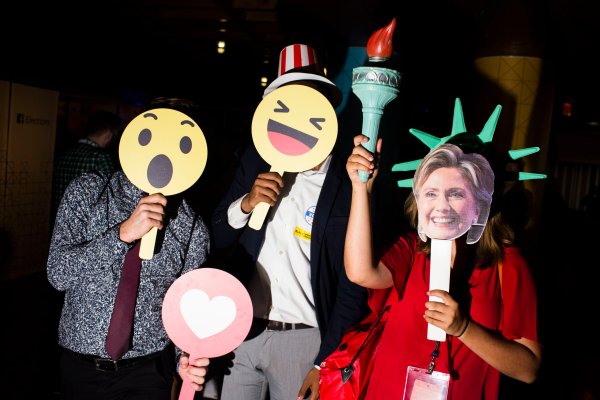 The Democratic Convention Has an Awkward First Night Telecast
Next Up: Editor's Pick