Meet the First Openly Transgender Speaker at a Party Convention

When Sarah McBride takes the stage in Philadelphia on Thursday night, she will have just three minutes to make her speech. But she will only need to say a word to make history.

When she does, the 25-year-old press secretary will become the first openly transgender person to address a major party convention. And if there is one thing she would like you to take away from her speech, it is the message that she is a fully realized person with feelings—not a duper, not a predator, not an abstract concept to be bandied about in America’s culture wars.

“People forget our humanity,” McBride told TIME from her hotel room on the first day of the 2016 Democratic National Convention. “Behind the dialogues and debates are real people that hurt when they are made fun of, that hurt when they are targeted for discrimination and that have the same dreams and aspirations as everyone else.”

The dialogues she is referencing have been happening in more places, with greater urgency and higher stakes, than anything her community has experienced in recent memory. Long marginalized, transgender people have found themselves the topic of White House briefings, Department of Defense announcements and lawsuits; the subject of fierce fights among state lawmakers; the starring characters of hit TV shows; as well as the objects of ridicule and derision on social media and in hearing rooms. In 2016, it is little surprise that convention speeches are proving to be an occasion to talk about transgender rights, too.

At the Republican convention, that took the form of openly gay billionaire Peter Thiel calling the debate over which bathrooms transgender people should use a “distraction.” McBride’s speech will be a poignant scene in the Democrats’ larger campaign to show how laser-focused they are on the LGBT community, doubling down on a wedge issue that helps drive young voters from the competition and reinforces the idea that they are the party of inclusion. A record two dozen delegates to the Democratic National Convention are openly transgender.

McBride, though she will be a new presence in America’s living rooms, is not new to politics or to offering herself up as a public face for the transgender community. The staffer for the LGBT rights group Human Rights Campaign grew up in Wilmington, Delaware, and was active in campaigns from an early age, rallying for the likes of late Delaware attorney general Beau Biden. Part of that was an effort to overcome her internal struggle about her gender identity, she says, but she found that “making a difference didn’t actually make me feel more complete.”

So in her junior year of college, at the end of her turn as American University’s student body president, McBride came out in a student paper op-ed entitled, “The Real Me.” She followed that with an internship at the White House, becoming—so far as she knows—the first openly transgender woman to work at 1600 Pennsylvania, and then became better known in D.C. circles as an advocate at the liberal think tank Center for American Progress. In recent months, she took a selfie in a North Carolinian women’s room that went viral. So when the congressional LGBT caucus decided they wanted to give half their time on the party stage to an openly transgender speaker, her name came up.

Sarah McBride is interviewed by a radio journalist at the Wells Fargo Center where she is attending Democratic National Convention on July 25, 2016 in Philadelphia.
Natalie Keyssar for TIME

In her short speech, McBride will emphasize that there are concrete policy goals—like passing the Equality Act—that LGBT Americans and their allies must pursue, and she will predictably say that Hillary Clinton is the only candidate that can make those goals a reality. On a more personal note, she’ll also be mentioning someone dear to her, telling a short story of love and loss that many people may relate to on some level.

McBride was married for just a few days to a transgender man named Andy Cray, an advocate in D.C. who worked on LGBT health issues. About six months into their relationship, they found out he had cancer. After believing he had beaten it, the couple then got the news that the cancer was back, it had spread, it was terminal, he had perhaps just weeks to live. Cray responded by proposing to McBride, and the two were married on the rooftop of their building just a few days before he died, her in a lacy white dress and him in a wheelchair. That Cray only got to live a small portion of his life as himself “underscored the urgency of this fight for me,” McBride says.

He died two years ago and McBride’s voice grows unsteady when asked what the two of them might have talked about if he had been here when she got the news that she would make a little bit of history for transgender people. “When he was dying of cancer, he wasn’t just crying about his plight. He wasn’t just crying because he was scared. He was crying because he wouldn’t be able to tell the people that were important to him, in his life, that he loved them and that he was proud of them,” she says. “I can hear him saying those words … Sort of, almost, perfectly.” 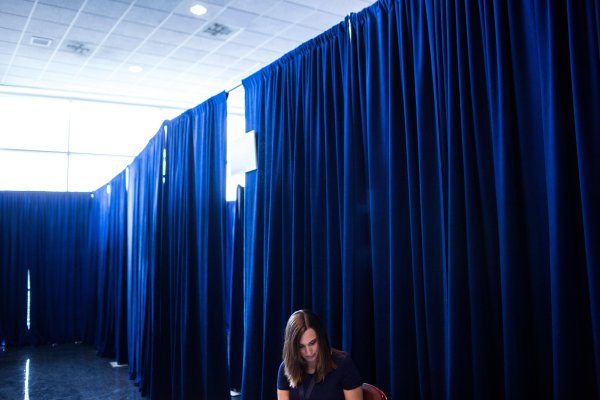