My Mother Was the Victim of a U.S. Drone

Rehman is a teacher in Pakistan and the son of Mamana Bibi, who was killed in a U.S. drone strike in 2012

My story isn’t much different from so many sons all over the world: I lost my mother too soon. But unlike many sons, I am still waiting for an explanation for why my mother was killed. Since the day that a U.S. drone struck and killed my mother as she stood in our family’s fields, I have waited for an acknowledgement or apology from the U.S. government. I’m still waiting to this day.

My children—Mamana’s grandchildren—watched it happen. It was a sunny October afternoon in 2012, and she was gathering okra in our family’s mostly vacant fields in Ghundi Kala village, North Waziristan, intending to cook it that evening. My children were home, standing about a hundred feet from her. They watched as she was struck by two Hellfire missiles, blown to bits before their eyes. My daughters and sons felt the explosion and were covered with the smoke and dust. Some were struck by shrapnel. My 3-year-old son Safdar, who had been standing on the roof, fell 10 feet from the blast’s shockwave, fracturing bones in his shoulders and chest.

Afterward my daughter Nabeela, then 8-years-old, went to the place her grandmother had been standing. She found her grandmother’s shoes. Our family gathered as many of her body parts as we could find and wrapped them in a cloth.

A year after her death, I traveled to the United States and told members of Congress about the drone strike and how it had devastated us. I saw with my own eyes how saddened they were. But no one in the U.S. government promised to investigate what happened.

Supporters of Defense of Pakistan Council (DPC), a coalition of religious and political parties, protest against the US drone strikes in the Pakistani tribal region, in Peshawar on Nov. 10, 2013.
A. Majeed—AFP/Getty Images

President Obama recently ordered the government to start disclosing the numbers of civilian casualties to the public. We welcome that, but we are in the same position we were in four years ago. No U.S. official has ever acknowledged what happened to my mother, or apologized to us. We are still waiting for justice. Without the help of organizations like Amnesty International, which documented my mother’s death in a 2013 report on drones, we might still be suffering in silence.

We aren’t asking for money, just that all victims of violence be treated the same. The same month my daughter Nabeela was injured in the drone strike that took my mother’s life, Pakistani schoolgirl and education campaigner Malala Yousafzai narrowly survived the Taliban’s attempt on her life. We are proud of Malala’s bravery, and the actions of all those who stand up for human rights in our country.

But there is a double standard here: While President Obama invited Malala to speak at the White House and offered his support, there are no words of sympathy for my daughter. I wonder if the president even knows my daughter’s name.

After the strike, we fled our village in Waziristan. My children had suffered not just from witnessing the death of their grandmother, but from losing their friends and from the ongoing war. They lost years of education, too. Because Safdar did not receive immediate specialist medical care after the drone strike, he continues to suffer complications from his injuries. When we go back to the village, the kids are still scared. It’s not just the drone strikes; it’s the Taliban and bombardment by Pakistani forces.

My children still ache from missing their grandmother. We feel deeply that the U.S. government has committed an injustice. We must have the truth about why my mother, my children’s grandmother, was killed so brutally. We deserve an apology and justice for what happened that October afternoon. 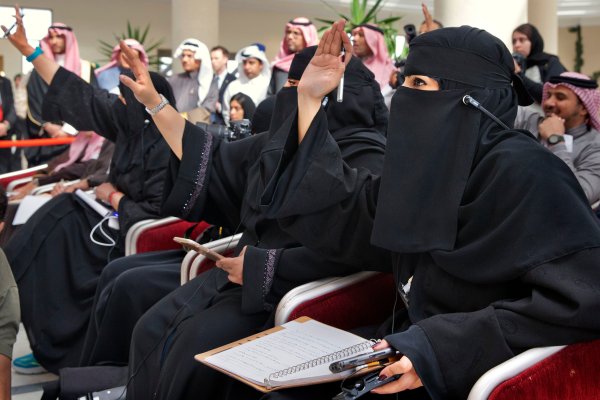 I'm a Saudi Woman Who Has a Male Guardian. He Is My Greatest Supporter.
Next Up: Editor's Pick