Donald Trump Undermines Everything Veterans Have Fought For

Republican presidential candidate Donald Trump acknowledges the crowd at the end of the Republican National Convention at the Quicken Loans Arena in Cleveland on July 21, 2016.
Joe Raedle—Getty Images
Ideas
By Dan McCready
McCready is an entrepreneur and a former Marine who lives in Charlotte

Donald Trump will speak Tuesday in Charlotte at the Veterans of Foreign Wars convention. He will tell thousands of our brave veterans how he, alone, can “make America great again.” His message of singular strength in a world enflamed by violence and instability has struck a chord. But we veterans can’t fall for it; we know the greatness of our nation can never lie with any one person.

Though each of us has our own story of military service, we veterans are bound together by a common oath to defend our country’s ideals. I was a college freshman on September 11, 2001, and I felt compelled to join the Marines after graduation. Witnessing the selfless devotion of my platoon in Iraq only strengthened my love of country. I’m a businessman and a father now. I am a political moderate who has voted for Democrats and Republicans, and I have never endorsed a political candidate publicly. But, today, I feel a duty to do what I can to stop Donald Trump from undermining the very things we fought for.

We fought for the safety of our country, but Trump would make us less safe. He has no foreign policy experience. By his actions and his words, he has shown himself to be self-serving and impulsive. A man who says: “I know more about ISIS than the generals do… believe me,” despite not spending a day in the service of his country, should not have the power to order one American into harm’s way, let alone launch a nuclear weapon.

We fought for democracy, but Trump promotes tyrants. He has praised Vladimir Putin. He suggested our NATO allies might be on their own if Russia attacks them. He minimized Saddam Hussein’s throwing “a little gas” (i.e., chemical weapons) on victims that included women and children.

We fought for the man or woman serving alongside us regardless of their background, but Trump turns our fellow citizens against each other. He speaks the language of fear. Among “second and third generation” Muslims in the United States, he falsely said: “there’s no real assimilation.” He has not just derided Muslims, but also immigrants, African Americans, and women. He even denigrated the service of a patriot and former prisoner of war, Senator John McCain.

We fought for freedom, but Trump would undermine our constitutional freedoms. Trump is a strongman and a bully who shows contempt for the rule of law. He initially suggested he would encourage military commanders to commit war crimes through torture. He used ethnicity to challenge the authority of a federal judge presiding over a fraud case against Trump University.

Some say Trump doesn’t mean what he says, or would act differently in office. That’s a dangerous bet to make. History shows democracies are fragile. With the enormous power invested in the executive branch, we cannot risk our republic on the hope Trump will change his behavior and act responsibly once he is the most powerful leader in the world, leading the most powerful military in the world.

Many veterans I know support Trump as the better of two bad choices. It’s true, Hillary Clinton is part of the political establishment, which has let many people down, and her sound bites are less exciting than Trump’s. Clinton has flaws, no doubt. But her flaws are no comparison to Trump’s. Actually, as a senator on the Armed Services Committee, and then as Secretary of State, she was serious, thoughtful, and tough on national security.

This came through again Monday at Clinton’s own talk to the Veterans of Foreign Wars convention, where she stressed the importance of defending allies and listening to military advisers. That may be why retired Marine General John Allen endorsed her Monday. I’d much rather have Clinton as my Commander in Chief than one who says, “I alone can fix it.”

Fellow veterans, resist any allure in Trump’s message. Honor what we fought for, and the sacrifices of so many before us, by stopping Trump. We swore to defend the Constitution against all enemies, foreign and domestic. We must put politics aside and, whether we identify as Republican or Democrat, vote for Hillary Clinton. 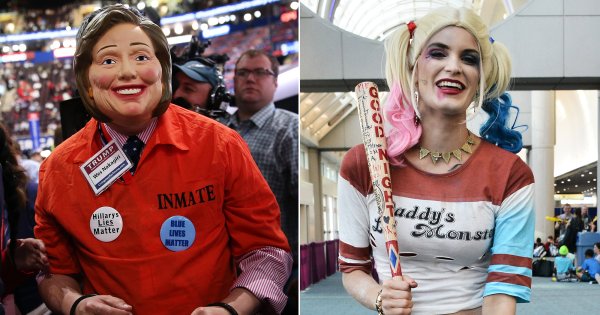 What Comic-Con Tells Us About the Presidential Election
Next Up: Editor's Pick