What Marissa Mayer Teaches Us About Mothers and Leadership

Marissa Mayer, CEO of Yahoo, is almost as famous for her brutally short maternity leaves as she is for her leadership of the troubled internet company, which on Monday announced it would be acquired by Verizon.

Let’s state the obvious: this is completely unfair. Google “AOL CEO Tim Armstrong children” and you’ll get no search results about the parental status of the leader of the other internet company that Verizon bought (though you might find his “distressed babies” comments). The fact that he’s a father of three is not even mentioned on his Wikipedia page. Just not relevant, Wikipedians evidently assume, since that must be the purview of his wife Nancy. Nor do we know much about the parental leave policies, or even the parental status of Lowell C. McAdam, the chairman and CEO of Verizon.

But it’s widely known that Mayer and her husband Zachary Bogue have three kids. In fact Mayer was famously pregnant when she got the top job at Yahoo and announced that although she’d intended to take six months of maternity leave when she was working at Google, things had changed, speed was of the essence at her new job and she was going to take just two weeks at home with the new baby, during which time, by the way, she would also do a little work.

This hardcore attitude raised eyebrows, which were further heightened when she soon afterwards abolished the ability for Yahoos, as employees of the internet company are known, to work from home—a benefit largely enjoyed by parents.

In December of 2015, she had twins and again—with things at Yahoo still at a crunch point—she took less than a month.

There were howls of protest about Mayer’s decisions. She was setting a bad example for women and her employees, said some. “Many people are rooting for Marissa Mayer to take a longer leave in order to be a better role model for women in professional and executive positions,” wrote Ellen Bravo the executive director of Family Values @ Work, after Mayer announced she was pregnant with the twins. “How many in senior positions will feel comfortable taking the full time if the top company mom takes so little?”

But there were arguments on the other side. If Mayer agreed to take on the task of untangling a knotty and time-sensitive problem like turning around Yahoo’s decline, she could hardly disappear for six months. That would be like the soccer goalie taking a short break when the score is 4-4 and the opposing side has the ball. That would also be bad for women. It might make boards shy of hiring female CEOs who are, or want to be, parents.

Of course, Mayer could have waited until the timing was better. Knowing she was pregnant Mayer could have skipped the opportunity that came her way and nobody would have blamed her (or even known). Other job offers would have no doubt come her way; she was a Google engineer for Pete’s sake. What she did instead was actually a classic example of what both Facebook CEO Sheryl Sandberg and YouTube CEO Susan Wojcicki have called not leaving before you leave. The opportunity came along and she did not let her pregnant belly get in the way of reaching out and grabbing it.

Instead Mayer used her executive advantages to offset the imperfect timing, installing a nursery in an office near her own (for which she was criticized) and writing on Twitter that she understood that as a CEO, she had privileges that were not afforded regular moms. These included her penthouse at the Four Season Hotel in San Francisco (hello, room service!) and a lot of household staff. “I understand I’m the exception, and need to be, for all the reasons cited,” she wrote on Twitter. “I find other ways/times to bond with my kids.” But she also pointed out that in 2015 every new mother at Yahoo took at least a month’s maternity leave and 75% of them took the full 14 weeks. And 825 men took the same amount of time to look after their new babies.

Of course, guy CEOs like Armstrong and McAdam don’t carry the children within them, nor need some post-natal recovery time for the physical feat of delivering intelligent matter without the aid of code, nor feed them using nourishment that was made within their bodies, as I’ve written before, but even so, the fact that their fatherhood is irrelevant to their public profile shows the double standard that women leaders are operating under.

So mostly what we learn about motherhood from Mayer’s example is that women in power, including educated workers in white collar jobs, have a lot more freedom to make parenthood work for them, to take time off to have kids, to find more flexible childcare options, than do workers with lower skills, who can sometimes get no maternity leave at all.

And what we learn about mothering while leading from Mayer is that moms need to develop the 100-yard stare when dealing with criticism. Mayer has kids, a great job and will reportedly be many millions richer after Verizon deal goes through in 2017. She doesn’t need to listen to those who don’t agree with her choices; she’s got real problems to solve. 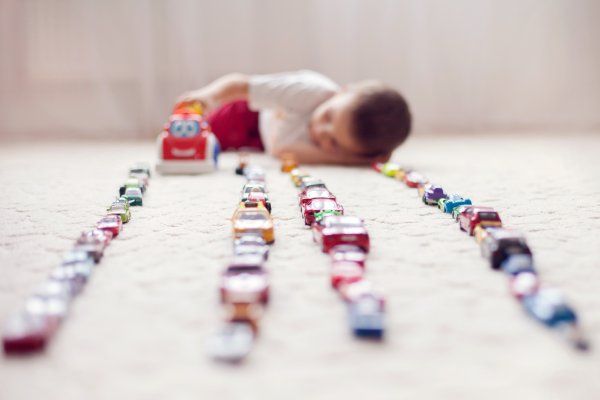 A Parent's Worst Enemy: The Gnawing Boredom of Summer
Next Up: Editor's Pick