It Wasn't Always So Expensive to Host the Olympics. Here's What Changed

Some things never change. When Baron De Coubertin, founder of the Olympic movement, estimated the costs of the inaugural 1896 games in Athens, he thought that a quarter of a million drachmas should do the job. The final bill, about $10 million in today’s terms, was six times that. The country’s experience of Athens 2004 was not dissimilar in terms of sticking to the budget, but the comparison ends there. The final bill for Athens has been estimated at around $11 billion. Rio 2016 has struggled to stick to its budget, and the final costs could easily—by my accounting, including infrastructure as well as the actual games—reach $20 billion.

Of course, the 1896 Olympics hosted just 251 athletes from 13 countries playing nine sports, while Rio will welcome over 10,000 competitors, from 207 countries playing 28 sports—not to mention over 5,000 coaches and officials. Still, a 200,000% increase in the bill suggests that something other than the geometric arithmetic of more states and sports has been at work.

That something, history reveals, is the relationship between the Olympic Games and global power.

It is worth recalling what a fragile enterprise the Olympics were in the decades before the First World War, when the games served as the athletic sideshow to a series of much grander Worlds Fairs and Imperial Exhibitions in Paris, St. Louis and London. The Olympics of the interwar era showed some growth in spending, but it was Berlin 1936 that changed the economics of the Olympics forever. Those were the first games, though certainly not the last, to be systematically allied to a political ideology and to directly serve as a form of state-directed global soft power. Such a shift in ambition required a stage worthy of the show. Berlin built the first multi-sports Olympic park, constructed a truly monumental 100,00-seat stadium, invented the torch relay, dressed the city like a film set and, all told, spent around $1.7 billion in today’s dollars.

In the aftermath of the Second World War, the games reverted to their smaller interwar form with budgets in the tens of millions. The 1948 London Olympics, self-consciously thought of as the “Austerity Games,” cost just $30 million. The biggest infrastructural investment was building a pedestrian walkway less than half a mile long. The organizing committee was ready to provide Olympic visitors with soap, but asked them to bring their own towels. Sporting equipment, down to the last basketball and clipboard, was punctiliously recorded and sold off after the games.

But Berlin had made an impression. Despite the infamy of its Nazi ideology, it had proved that the Olympics could be an opportunity for a state to assert itself in the world. Beginning with Rome 1960, the summer games served as the centerpieces of their host nations’ announcements of domestic transformation and rising international standing. West Germany used the Olympics to mark the end of their post-war status as pariahs. Mexico made the leap into the ranks of industrialized nations. And Tokyo took the trend to a new level by allying the Olympics with gargantuan programs of urban development. A titanic wave of poured concrete and infrastructural spending, costing more than $10 billion, covered the rebuilding of the Tokyo’s sewage system, 100 kilometers of urban superhighways, two new subway lines, a refurbished port and airport, a hyper-modern monorail to take arrivals to the city’s four new five-star hotels, and the jewel in the crown: the Shinkansen or ‘bullet train.’ As with similar adventures in Olympic urbanism since, it was accompanied by the large-scale displacements of citizens.

The intersection of such high-level symbolic ambition, made all the more appealing with the arrival of global television audiences in the 1960s and ‘70s, raised the stakes and the costs of hosting.

Montreal in 1976 showcased three other sources of cost inflation that continue to plague the games: grandiose and experimental architecture, unreasonably high prices from suppliers and contractors, and long-term borrowing. The city’s Olympic stadium—a.k.a. “The Big Owe”—was budgeted at $145 million, came in at $1.2 billion and required so much debt funding and post-games repair that the total cost in 1976 was already $2 billion. Though Los Angeles 1984 appeared to offer a stripped down model of the Olympics, in which adapting existing facilities cut capital costs to the bone, few cities can draw on L.A.’s extensive sporting infrastructure, and the technical demands of sports federations have become so exacting that renovation costs are often still high.

Even so, despite the decades of proof that hosting the Olympics could be a costly and traumatic task, political regimes and city coalitions remained prepared to shell out—which makes sense, as the payoff was also easy to see. The 1992 Barcelona Olympics, for example, came at the end of a long period of imaginative urban change that cost over $7 billion. In front of a global TV audience, the city went from a rustbelt port to the post-industrial jewel of the Mediterranean, Many hosts have spent a lot of money trying to repeat the trick, though none with such good results.

In the 21st century the costs of staging the games has taken another step upwards. More Olympics-established cities have tried to keep prices down—Vancouver and London, at the cheaper end of the scale, cost $10 billion and $16 billion dollars apiece—but, while they do face rising post-9/11 security costs, they don’t need the Olympics to show off their success. However, rising powers still chose to host the games to mark their global ascension. It looked as if Beijing had set a new and surely unbreakable record, spending $40 billion, but the bill for the pharaonic enterprise that was the Sochi winter games, in 2014, was $55 billion, making those the most expensive Olympic Games ever held.

Amongst the many issues on the desk of Thomas Bach, the current president of the IOC, trying to control the spiraling cost of the games remains an urgent priority. The numbers of cities prepared to bid for the games has been dwindling, with just two candidates for the 2022 Winter games. Under the new bidding rules and criteria introduced by Bach in 2014 reuse and renovation is encouraged, and the four competitors — Budapest, Paris, Rome and Los Angeles — are all offering games budgeted to cost less than $10 billion.

In the absence though of a more radical reshaping of the games, however, even this retrenchment may prove impossible to achieve. The Olympics never were a matter of sports alone, but an important piece of international power dynamics. Projecting power is expensive—and as long as that’s true, the Olympics will be too.

David Goldblatt, an expert in the sociology of sports, is the author of The Games: A Global History of the Olympics. 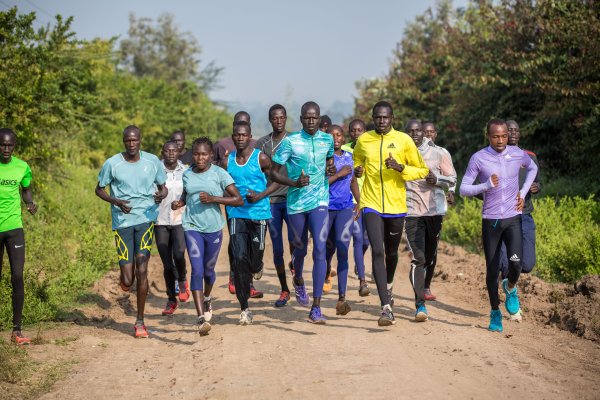 The First Team of Refugee Olympians Will Be Competing for Dignity
Next Up: Editor's Pick