U.S. Ambassador to Libya Chris Stevens gives a speech on August 26, 2012 at the U.S. embassy in Tripoli.
Mahmud Turkia—AFP/Getty Images
By Katie Reilly

The mother of the late U.S. Ambassador to Libya Chris Stevens—who was killed in the 2012 attack on the U.S. diplomatic compound and CIA annex in Benghazi, Libya—has called for an “immediate and permanent stop” to the use of her son’s name by GOP leaders and Donald Trump in his presidential campaign, calling the practice “opportunistic and cynical.”

“As Ambassador J. Christopher Stevens’s mother, I am writing to object to any mention of his name and death in Benghazi, Libya, by Donald Trump’s campaign and the Republican Party,” Mary Commanday said in a letter-to-the-editor published in the New York Times on Saturday.

“I know for certain that Chris would not have wanted his name or memory used in that connection. I hope that there will be an immediate and permanent stop to this opportunistic and cynical use by the campaign.”

Republicans have repeatedly criticized presumptive Democratic nominee Hillary Clinton for the way she handled the Benghazi attack as then-Secretary of State.

Commanday’s request echoes the sentiments of Stevens’ sister, Anne Stevens, who said she doesn’t blame Clinton for her brother’s death and doesn’t “see any usefulness in continuing to criticize her.”

“I do not blame Hillary Clinton or [Former Secretary of Defense] Leon Panetta,” she said in an interview with the New Yorker last month. “They were balancing security efforts at embassies and missions around the world. And their staffs were doing their best to provide what they could with the resources they had.”

She also criticized the way the Benghazi attack has been politicized and used in the current presidential campaign, according to the magazine.

“With the many issues in the current election, to use that incident—and to use Chris’s death as a political point—is not appropriate,” Anne Stevens said.

The mother of another U.S. Foreign Service official killed in the Benghazi attack spoke at the Republican National Convention this week, faulting Clinton for her son’s death. Trump has done the same in his own speeches.

“Her decisions spread death, destruction and terrorism everywhere she touched,” Trump said about Clinton in a recent speech on foreign policy. “Among the victims is our late ambassador, Chris Stevens.”

“He was left helpless to die as Hillary Clinton soundly slept in her bed,” Trump said. 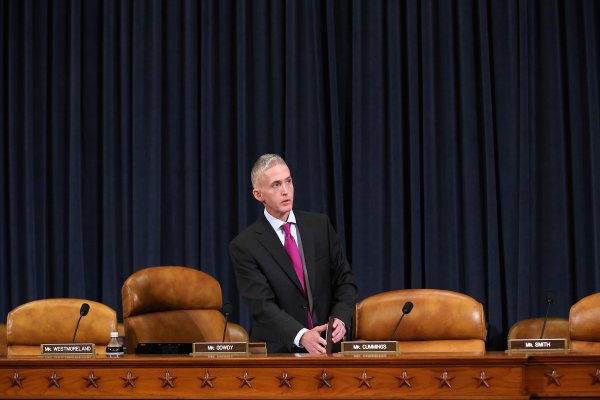 Read the New Report by the House Benghazi Committee
Next Up: Editor's Pick