Why People Are Upset About the Batman: The Killing Joke Movie

The Killing Joke was already one of the most controversial stories created in comics. In the graphic novel, the Joker paralyzes Barbara Gordon, a.k.a. Batgirl, and shows nude pictures of the crippled woman to her father, Commissioner Gordon. Now, an animated movie based on that iconic storyline, which screened at San Diego Comic-Con on Friday night, has sparked another debate by altering the relationship between Batman and Batgirl.

In the 1988 graphic novel written by Alan Moore and illustrated by Brian Bolland and John Higgins, the Joker breaks out of Arkham Asylum and kidnaps and tortures Commissioner Gordon to prove even the most noble people can be pushed to madness. One of his torture tactics is to hurt Gordon’s daughter Barbara. The Joker shoots her, paralyzing her and ending her career as Batgirl, before stripping her down and taking pictures of her to show to her father.

Though many call the book the definitive Joker origin story (the tale includes flashbacks to his pre-Joker career when he had a job and family), feminists have long critiqued it. They argue that the sadistic plot twist objectifies Gordon and strips her of her power in a manner that would never happen to a male character. Moore himself has even said in retrospect, “I don’t think it’s a very good book” and expressed regret about the Barbara storyline. Even the creators of the new Killing Joke film have acknowledged in interviews that in the comics Barbara is a plot device, there only to be hurt and motivate Batman’s quest.

Those critiques led to backlash when DC Entertainment announced that The Killing Joke would be adapted into an R-rated animated film (with Mark Hammill playing the Joker). But outrage only grew on Friday night when footage from the film leaked before the Comic-Con screening and news broke that Batman and Batgirl have a sexual relationship.

In the beginning of the film, Batman and Batgirl, who have a father-daughter dynamic, have sex on a rooftop. Then the plot of the original Killing Joke with Barbara’s maiming is set into motion.

The creators have said that an entire prologue focused on Barbara, including her sexual encounter with Batman, was included in the film to develop her character in a way that the comic failed to do. “It was really important to us to show that both of the characters make some pretty big mistakes. I mean, his “parental skills” aren’t that great,” artist and producer Bruce Timm said in an interview with Vulture.

But some audience members were even more disturbed by a line that suggested the Joker rapes Barbara Gordon. In the film, Batman talks to a group of prostitutes who say the Joker always goes to a brothel when he breaks out of Arkham. This time he didn’t, and one of the prostitutes concludes, “Maybe he found himself another girl.”

Timm says the filmmakers did not mean to imply that the Joker raped Batgirl. “I don’t think that actually,” he told Vulture. “If I had, I probably would have changed the line. I never, ever thought that he actually raped her. Even in my first read of the comic, I never thought that. It just seemed like he shot her and then took her clothes off and took pictures of her to freak out her dad.” 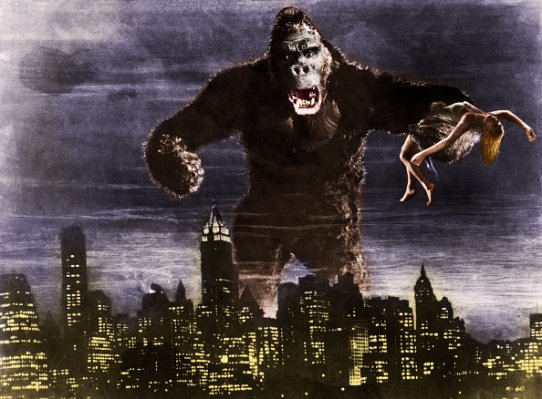 See the 'Biggest' King Kong Ever in New Kong: Skull Island Poster
Next Up: Editor's Pick