“This idea that America is somehow on the verge of collapse. This vision of violence and chaos everywhere doesn’t really jibe with the experience of most people,” Obama said during a joint news conference with Mexican President Enrique Peña Nieto. “I think it is important just to be absolutely clear here that some of the fears that were expressed throughout the week just don’t jibe with the facts.”

From crime to immigration, Obama said, Trump and various other speakers at the Republican convention embellished the facts in their depictions of widespread death and a flood of migrants coming across American borders. Violent crime rates, Obama said, have been lower during his presidency than at any point during the past four decades, despite an uptick in murders in some major cities. Obama noted the recent violent tragedies Americans have lived through — from Orlando and Minnesota to Dallas and Baton Rouge — but said that as a whole, America is far less violent than it was a few decades ago.

“There are going to be different visions about where we should be going as a country; how we can provide jobs … how we make sure our tax system is fair,” Obama said of Democrats and Republicans. “But we’re not going to make good decisions based on fears that don’t have a basis in fact. That is something I hope that all Americans pay attention to.”

Peña Nieto on Friday was also asked to address the Mexican government’s perception of the presidential race, given Trump’s promise to build a wall between U.S. and Mexico and make Mexico pay for it. Peña Nieto said he would not weigh in on the American democratic process and that Mexico will always be a partner to the U.S.

“We are going to respect the decision of the American people,” he said. 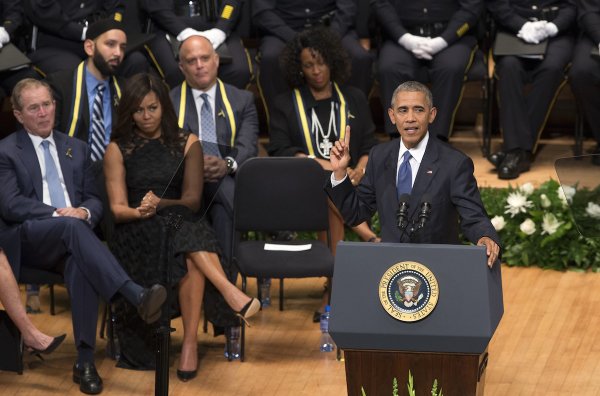 President Obama Turns to Kennedy Speech for Open Letter to Law Enforcement
Next Up: Editor's Pick