The Looking Movie is Worth Your Time

HBO’s Looking never found its audience—though it certainly found its artistic tone. In two seasons, the show, a rare series focused on gay characters, mastered a melancholy, lo-fi way of depicting a group of friends in San Francisco. This tone was so focused on character, at the expense of incident, that the show got a not-entirely-unearned rep for being “boring.” Then again, the show was weighted by unfair expectations—that it would reflect each viewer’s experience of being gay.

Given Looking‘s meager fan base and the fact that its very existence seemed more resented than embraced by gay people, it’s surprising that HBO made good on its promise to make a movie wrapping up the story. But “story” is, as ever, either generous or not quite right when it comes to Looking. The movie, airing Saturday night, is a continuation of a vibe that’s special and unusual for TV. It’s a last look that the show’s fans can linger over.

I’m reticent to give away the circumstances under which the characters meet up, for fear of spoiling what plot there is here. But suffice it to say that all three of our leads—the deflated optimist Patrick (Jonathan Groff), the roguish cynic Agustín (Frankie J. Alvarez), and the still-hopeful Dom (Murray Bartlett)—come together as one contemplates a major life change. And all are forced more than ever to come to terms, in their own individual ways, with the changes wrought by getting older. None are, exactly, young anymore, and are forced to come to terms with an increasing pile of past decisions that forecloses future options. Pathways that once seemed infinite are starting to close off.

The show’s creator, Andrew Haigh, directed last year’s Charlotte Rampling film 45 Years, and Looking shares with that project a woozy sense of half-resentment, half-simple regret at the way time’s passage robs possibility. Part of the reason so little happens with Patrick is because, after a certain point around 30, there’s only so much that realistically could. He’s a little older than the characters of Girls, the show to which Looking has often been compared, but his world is also far more sensibly rendered. On Girls, Hannah has bounced between jobs, lovers, and graduate programs in a manner that’s endlessly inventive. The same ruthless drive to reinvent has never been Looking‘s bag. When Patrick’s life changes, it’s entropy at work, not imagination.

I would have loved to spend more time in his movingly depicted world, and to see a more extended version of his pathway towards self-acceptance and meaningful, lasting love—a pathway that, after all, is not likely to end. But a movie is more than I realistically might have expected. For fans, Looking‘s conclusion will be welcome. For the uninitiated, it’s a moodily made argument to check out a series that deserves a long afterlife. 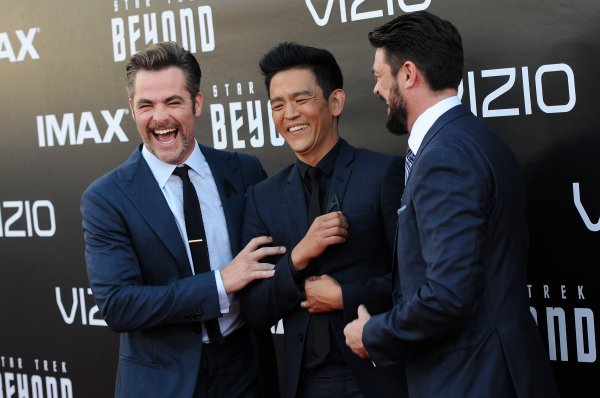 John Cho Says Gay Kiss Was Cut In Star Trek Beyond
Next Up: Editor's Pick