How Will Burma Remember Its Political Prisoners?

Between the buildings there are little plastic bushes and palm trees. The circular shape of the sprawling complex looks like the real facility, which is still operational. Kyaw Soe Win, a genial, soft-spoken 48-year-old, stands over the model. “This hall, I was here,” he says, pointing to an annex where he was locked up for six years in the 1990s for distributing leaflets and communicating with exile groups.

Kyaw Soe Win is standing in the cluttered exhibition room at the offices of the Assistance Association for Political Prisoners (AAPP) in Rangoon, Burma’s biggest city. Insein prison lies a few townships to the west. The exhibit, which was set up in March, is small but leaves an impression. A royal blue prison uniform hangs on one wall. There are images of stress positions used by guards as a form of torture: the “airplane,” the “motorcycle.”

Since Kyaw Soe Win was released, the country, formally known as Myanmar, has transitioned from a military dictatorship to a fledgling democracy. The number of incarcerated political prisoners in Burma’s jails has dwindled from a peak of about 2,000 in 2009 and 2010 to 82 in June this year, according to AAPP, an NGO that advocates for former political prisoners. And many former inmates are now members of parliament and senior officials in Nobel laureate Aung San Suu Kyi’s new government, which took power in April after dominating national elections in November. One of the government’s first acts was releasing dozens of political detainees.

Although draconian laws still give authorities leverage to detain activists and journalists — some 170 people are awaiting trial on political charges — Burma is no longer a vast network of dungeons and prison camps.

The modest exhibition at AAPP’s Rangoon office is part of a growing push to openly commemorate the sacrifices of political prisoners in the country, and seek proper recognition for the suffering they endured. In scale, these efforts are nothing like the museums and memorials in Germany and Cambodia — marking the horrors of the Holocaust and Khmer Rouge regime respectively. Burma’s memorials to its brutal past are much smaller, less funded and sometimes lonely projects, like the artist who last year exhibited plaster casts made from the hands of political prisoners.

Kyaw Soe Win feels that now is the time to push for reparations. “We can do it in 2016,” he says. “During the military regime era we could not do it, if we did, we would be arrested.”

In May, AAPP released the first comprehensive report detailing the difficulties former political prisoners have reintegrating back into society, including problems finding work, and a lack of care to help treat the effects of years mental and physical trauma. The group called on the government to firstly, make an official apology. Afterwards, a series of reparations should be enacted, they said, including financial compensation, vocational training and scholarships, removing criminal records so job seekers can look for employment without stigma, free health care for those who were tortured, restoring confiscated land and ensuring that former political prisoners can obtain essential documents such as passports and ID cards.

Since the military seized power in a coup in 1962 — giving birth to a succession of authoritarian regimes — between 7,000 and 10,000 people have been thrown in jail for political offenses. And many were targeted simply for being affiliated with an illegal group, passing out fliers or demonstrating.

Kyaw Kyaw Lin, the 35-year-old secretary of the ruling National League for Democracy’s (NLD) eastern district in Rangoon, was freed in 2012, having served five years of a longer sentence for being a member of a blacklisted organization. He was arrested in 2007 after telling the BBC about monks gathering outside Suu Kyi’s residence when she was under house arrest. On a rainy evening in downtown Rangoon, he and three friends, all of whom had spent some time behind bars, are sitting in one of the city’s cheap and plentiful beer stations. Cigarette smoke fills the air as glasses are refilled.

The group says they are thinking less about museums and more about practical matters, like finding steady work. “No money!” 53-year-old Lin Aung San shouts in English, holding up his fingers and rubbing them together. According to AAPP, 1 in 5 former political detainees is unemployed.

“We want to make our life new again,” Kyaw Kyaw Lin explains. Not one of them has a real job. Kyaw Kyaw Lin’s position with the NLD is not a salaried position. But more than financial compensation, they feel that their time behind bars has not been properly acknowledged, and that as a result, their day-to-day lives are a struggle for meaning.

“We want official recognition [as political prisoners] by the parliament,” says Ko Chan Thar, a 35-year-old former monk who was sentenced to 18 years in prison after taking part in the Saffron Revolution in 2007, when Burma’s monks rose up against the military. With no job, he sells books provided by NGOs.

“As political prisoners, our physical and mental needs were destroyed,” he says, alluding to the wretched conditions endured on the inside, conditions that have caused lasting psychological problems, severed bonds between families, and triggered, in some cases, drug and alcohol abuse. “Who will fulfill our mental needs?”

AAPP’s report documents the horrors many political detainees were forced to endure. Prisoners had little access to food, drinking water or medical care, and many languished for years in solitary confinement. Jailers reportedly used a creative set of stress positions and torture techniques: one involved repeatedly rolling an iron or bamboo rod on the victim’s shins until the skin peeled off. Some of those who had been in Insein prison told of being locked in cages used to house military dogs in the British colonial era.

Today, victims of the regime say they risk being overlooked in the name of national reconciliation. Sitting at the beer station, Kyaw Kyaw Lin says the NLD’s lack of urgency on addressing the plight of political prisoners is understandable (an NLD spokesman declines to comment for this article and other senior officials could not be reached after repeated phone calls). The country’s constitution, drafted by the military in 2008, guarantees members of the armed forces 25% of seats in parliament and control of three key ministries including defense, home affairs and immigration. Suu Kyi has to be careful about dragging up too much of the past. She has said publicly that she doesn’t want to seek “revenge” on the generals of the former regime, focusing instead on forgiveness and reconciliation. As de facto leader, Suu Kyi has other, more pressing issues at hand — rejuvenating a struggling peace process with ethnic rebel armies, fixing the country’s broken economy and rebuilding the country’s ailing health and education systems.

Near AAPP’s office in Rangoon is the 88 Generation Memorial Hall, set up by activists and political prisoners who took part in student-led mass protests against the government on Aug. 8, 1988. Opened quietly around the anniversary of the uprising last year, the memorial is mostly a collection of photographs from the movement, which was crushed by the military on the streets of Rangoon. Its members were thrown in jail, forced into exile or, in Suu Kyi’s case, put under house arrest for a combined 15 years until 2010. The uprising, rather than the prison terms that were a result of it, is the focus here. The organizers sell plastered fists with the number 8 written in red across the knuckles.

Like the AAPP exhibition, the 88 Memorial Hall has an impermanent feel. Both buildings are rentals and located about an hour’s drive from the city center. It is difficult to imagine anyone visiting who isn’t involved in activism, journalism or to specifically to meet with former political prisoners. On the entrance sign of the Memorial Hall, the word temporary is even written in parenthesis. Ant Bwel Kyaw, who was sentenced to 65 years for sending emails to foreign governments (he was later freed in an amnesty) says the photos on display are copies, as it still doesn’t feel safe to put up the authentic images.

“We didn’t exhibit original versions for security reasons. The previous military regime can keep or destroy the original versions so we’re hiding those in a secure place,” he says. Aung Maw, a former student activist who oversees the Memorial Hall, seems frustrated with its limitations. “We couldn’t even collect enough documents from the 1988 uprising. And also, this building is temporary; the contract will be over at the end of this year,” he says.

Owners of the memorial hall — who are petitioning the new government to have it recognized as an official museum — received some good news in July when the NLD’s new Culture Minister visited and vowed to support the creation of an official space with a proposal in parliament.

There are those who feel Insein prison could one day serve as a more permanent museum. Before that can become a reality, the prison — now synonymous with inhumane conditions and torture — would need to shutter. “Close the prison first,” Kyaw Soe Win says. “Later, we will try.” 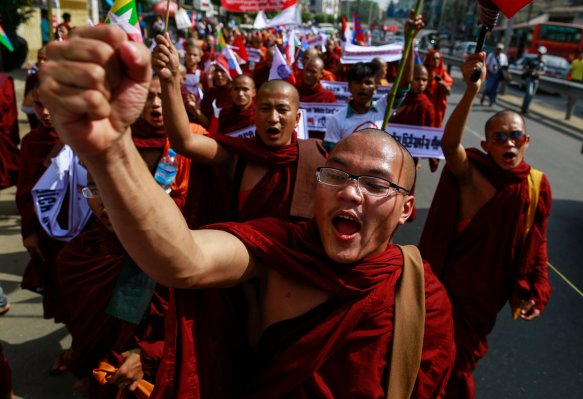