Justin Dillon, an alternate delegate from the District of Columbia is handing out 200 buttons opposing Donald Trump on the convention floor, in Cleveland, on July 21, 2016.
Zeke Miller for TIME
By Zeke J Miller

Never Trump lives on on the GOP convention floor—well, sort of.

Justin Dillon, an alternate delegate from the District of Columbia is handing out 200 buttons opposing Donald Trump on the convention floor, just hours before Trump is set to formally accept the nomination.

“Sometime party loyalty asks too much,” the button says, including the hashtag #NeverTrump and a pair of thumbs down emoji.

The DC delegation is seated the furthest from the podium, in recognition of the high propensity of Anti-Trump delegates in its delegation. Many members of the delegation were seen sporting the buttons and Dillon said he passed some to delegates in Ohio and Virginia.

Dillon has been the subject of jeers from some pro-Trump delegates with one Texas delegate accosting him and calling him “retarded” in full view of reporters. 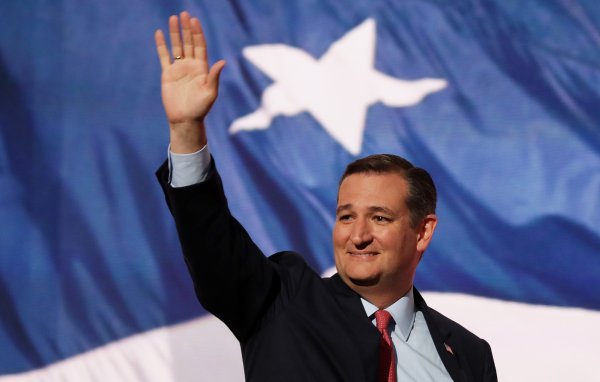 How Some Convention Speakers Avoided Endorsing Trump
Next Up: Editor's Pick