James Dobson endorsed Donald Trump for president hours before the newly minted GOP nominee is slated to take the stage the final night of the Republican National Convention.

“I have decided to endorse Donald J. Trump for President of the United States, not only because of my great concern about Hillary Clinton,” Dobson said in a statement. “I am supporting Mr. Trump primarily because I believe he is the most capable candidate to lead the United States of America in this complicated hour.”

The Focus on the Family founder’s decision to endorse Trump was prompted by Texas Sen. Ted Cruz’s address to the RNC on Wednesday night, a Dobson spokesperson told TIME. Cruz congratulated Trump for winning the nomination but did not endorse him, and was booed as he spoke and left the stage.

Dobson was one of the evangelical leaders to endorse Cruz early, in attempt to rally evangelical voters around one candidate. “Ted Cruz’s record on religious liberty, life, and marriage is second to none in this Republican field,” Dobson said in December. “Shirley [Dobson’s wife] and I have been praying for a leader such as this, and we are confident that Ted Cruz has the moral and spiritual foundations to lead our nation with excellence.”

Dobson recorded a television ad for Cruz, as well as a phone message urging South Carolina primary voters to pick Cruz over Trump. “At this point it looks like a vote for anyone other than Ted Cruz is a vote for Donald Trump,” Dobson said in the message. Trump won the state.

In June, a month after Cruz lost Indiana, Dobson joined Trump’s newly formed executive evangelical advisory committee, and released a statement calling Trump a “baby Christian” who “appears to be tender to things of the Spirit.”

“All I can tell you is that we have only two choices, Hillary or Donald,” Dobson said then. “Hillary scares me to death. And, if Christians stay home because he isn’t a better candidate, Hillary will run the world for perhaps eight years. The very thought of that haunts my nights and days.”

Dobson’s endorsement of Trump on Thursday added that he is “very enthusiastic” that Trump chose Indiana governor Mike Pence as his running mate, and that he is “heartened” by Trump’s commitments to “appoint conservative Supreme Court justices, preserve religious liberty, rebuild the military, and defend the sanctity of human life.” On Trump’s position on abortion, Dobson said he is choosing “not to evaluate him based on his past position but rather on what he says are his current convictions.” Dobson said his decision was also influence by Trump’s children, and their positive relationship with their father.

Nearly 80% of white evangelicals support Trump, according to the Pew Research Center. Liberty University president Jerry Falwell, Jr., who was among the first evangelicals to endorse Trump, will also speak Thursday night in Cleveland. 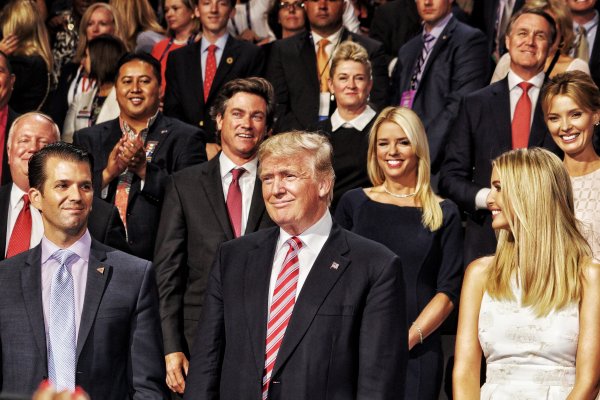 Donald Trump Torpedoes 'Peace Through Strength'
Next Up: Editor's Pick