Roger Stone at the Republican National Convention in Cleveland on July 21, 2016.
Courtesy of Jennifer Jacobs
Ideas
By IDEAS Desk

Anti-Hillary Clinton merchandise is out in full force at the Republican National Convention in Cleveland this week. The latest to make a splash on social media? A t-shirt of Bill Clinton’s face in the style of President Obama’s 2008 Shepard Fairey HOPE poster—but with the word RAPE underneath it instead.

According to the Guardian, Donald Trump supporter Roger Stone is the creative mastermind behind the shirt, which references sexual assault allegations made against the former president and presumptive First Gentleman. On Thursday afternoon Bloomberg Politics reporter Jennifer Jacobs tweeted a photo of Stone wearing the shirt.

In 1999, Juanita Broaddrick came forward with the accusation that the former president had raped her during his 1978 campaign for Arkansas Governor. Bill Clinton has also been accused of other sexual misconduct. No criminal charges have been brought, and Clinton has denied the accusations. There have also been rape and sexual assault allegations made against Trump, which he denies.

As Charlotte Alter has outlined for TIME, sexist attacks against Hillary Clinton have been top sellers this campaign season. Other anti-Clinton shirts at the convention feature phrases including “Hillary for Prison” and “Life’s a bitch, don’t vote for one.” And then there are the pins, which include messages such as “KFC Hillary Special: 2 fat thighs 2 small breasts…left wing” and “Hot chicks for Trump.”

Meanwhile, the Clinton campaign is not stooping to body-shaming attacks. Instead, it’s using Trump’s words against him. On Thursday the Clinton campaign unveiled a new ad featuring clips of Trump praising Clinton’s abilities and the “Trump Yourself” tool that lets users superimpose his negative quotes over their profile pictures. 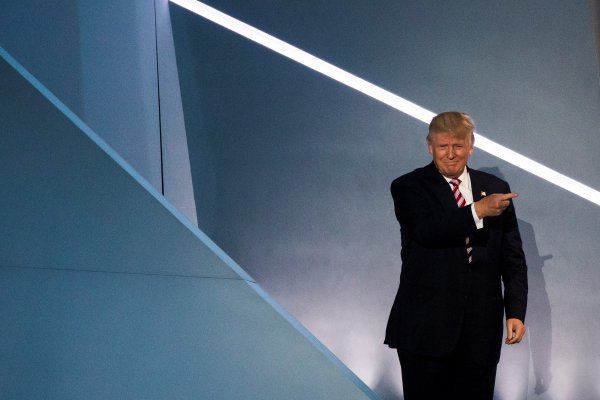 Hillary Clinton Tells People to ‘Trump Yourself’ on Facebook
Next Up: Editor's Pick